Football comes ahead of Schaumburg in third quarter 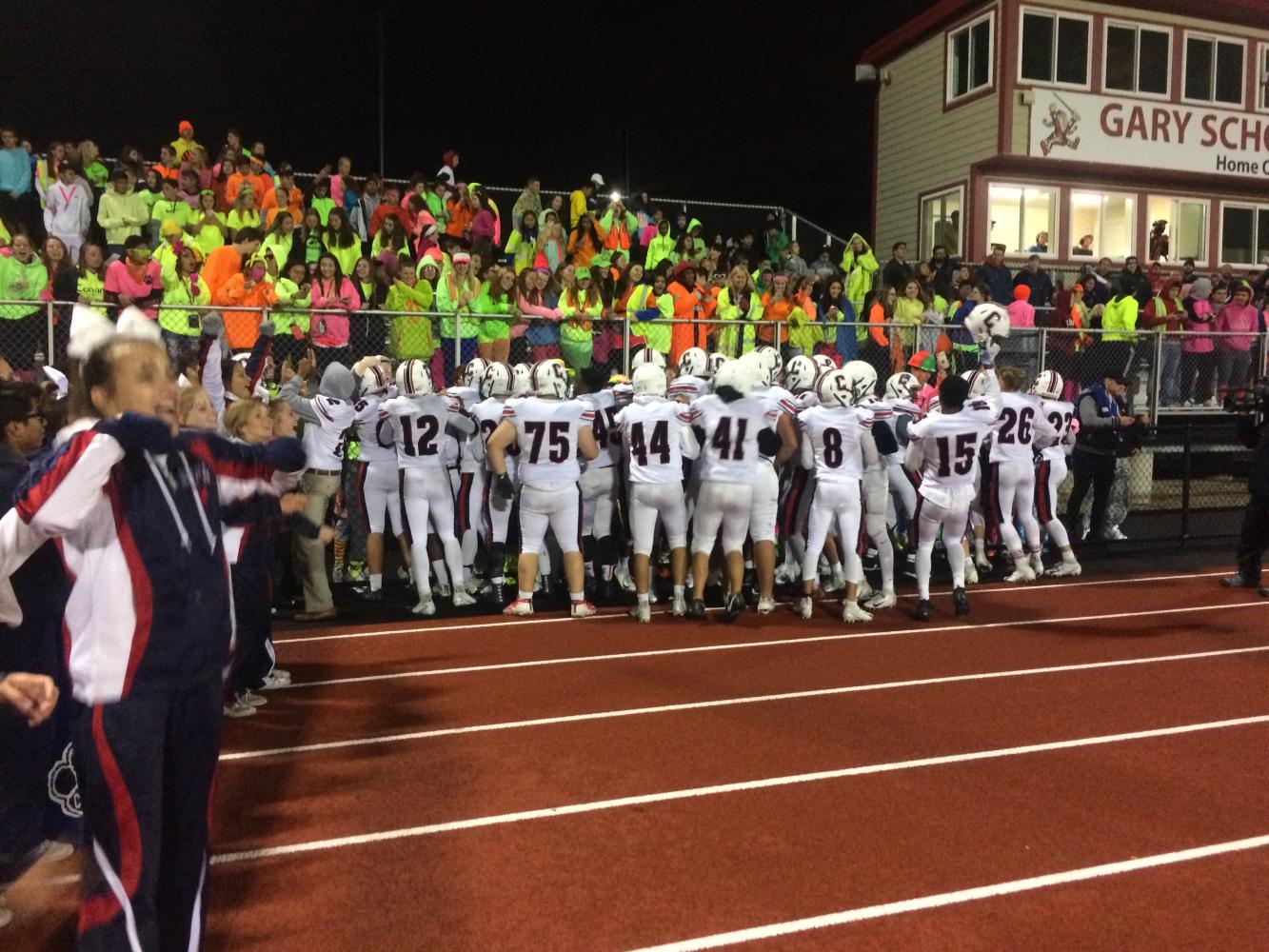 After beating Schaumburg for the first time in three seasons, the football team celebrates with the Cougar Crazies.

Despite having to go on the road last Friday to play against the Schaumburg Saxons’ Homecoming crowd, Conant still defeated the Saxons 28-10 thanks to a big third quarter, which improves their overall record to 4-2 and their MSL West record to 2-0.

The Saxons had the ball to begin the third quarter and punted after three plays. The Cougars started the drive at the Saxons’ 42-yard line and took two minutes and 19 seconds to drive down the field as captain and quarterback Kevin Polaski, ‘19, scored a 7-yard rushing touchdown to give the Cougars a 14-10 lead.

The Saxons failed on a fake punt on their next drive, giving Conant the ball at the Saxons’ 34-yard line. Running back Malik Frederick, ‘21, scored a 6-yard rushing TD. Frederick also had a 40-yd rushing TD in the fourth quarter, where he tipped toed the sideline before breaking free of the defense.

Frederick said, “The second half — I think we realized how much was at stake and how much this game meant to all of us and we just realized we had to win the game.”

The Cougars kicked off the scoring when Polaski scored a 1-yard rushing TD with 20 seconds to go in the first quarter. However, that lead lasted for just 12.2 seconds, as Saxons’ wide receiver and defensive back Heze Trotter, ‘19, returned a kickoff for an 84-yard TD. Saxons’ kicker Jonathan Mueller, ‘19, kicked a 20-yard field goal with just over five minutes remaining in the first half to give the Saxons a 10-7 lead at halftime.

On the kick return for a TD, Stortz said, “We’ll have to look at it on the tape, see what our breakdown was and correct it. But I think for the rest of the part of special teams, I think our kids did a really good job.”

The Cougar defense excelled on Friday, as they were responsible for giving up just three points. Stortz said, “Obviously defense is what football is all about. You’ve got to play great defense, and I thought our kids were able to keep their guys in check and they made plays when we needed them to make plays.”

Polaski said, “We just got to keep playing like we are. We can’t get cocky, we can’t our hopes up about anything, we got to come out, play hard just like every other week.”

The Cougars will face another homecoming crowd this Friday at Fremd.