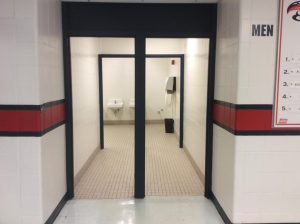 The boys’ bathroom located near the cafeteria has had its doors removed in an effort to combat increased vaping in this area. (Photo taken with administrative approval.)

Since the end of spring break, vaping-related infractions at Conant have nearly “tripled compared to all of last school year,” according to Lead Assistant Principal Thomas Mocon.

In order to combat the issue, administrators have taken a few protective measures, one being the recent removal of the doors of the first floor boys’ bathroom.

Assistant Principal Mark Langer explained, “That bathroom in particular was where numerous vaping infractions were occurring. Removing the doors allowed for easier monitoring of the areas and to increase safety of that area.”

Lead Assistant Principal Thomas Mocon said the change was necessary because even increased staff awareness and monitoring hadn’t solved the problem. “We had staff do regular sweeps of the bathrooms, and despite word-of-mouth that staff was watching the area more closely, the infractions continued.”

Administrators said they hoped that removing the doors will also remove the false sense of security and prevent students from continuing to vape.

Some students have found the renovation to be surprising and have expressed concerns about the impact of removing doors on privacy and safety.

Saurav Sumughan, ‘19, said, “I’m confused as to why they only took the doors off of one bathroom, and I would especially like to know why only the boys’ bathroom doors were removed—why weren’t girls’ bathroom doors removed, too?”

Langer said, “[Nearly] all of the bathrooms in the school will be going through [renovations] this summer.”

Aparna Ayyah, ‘19, said she thinks the removal of bathroom doors is inappropriate. “This is very much an invasion of one’s privacy,” she said. “The first floor boys’ bathroom currently looks very open, and if it were a girls’ bathroom, I wouldn’t use it.”

As a way to ensure student privacy, the summer bathroom renovations will be done so that people can’t see directly inside. Principal Julie Nowak said, “The bathrooms will be more like what many recall from junior high and elementary school where there is a wrap-around entrance.”