For most students, the Conant gym is the center of athletics and assemblies, combined with memories of blood, sweat, and the dreaded heart straps on the shelf.  However, on Saturday, January 31, Conant’s main hallway was turned into a Gatsby themed wonderland, complete with big gold and black decorations covering the trophy cases.  Even more decorations were awaiting in the gym.  The entrances of the gym were lined with balloons and huge white arches, and purple lights illuminated the white backdrops around the room.

Student Council President Claudia de Bruyn said, “My favorite part was walking into the gym. It was completely transformed and breathtaking. I remember just saying ‘wow’ over and over again.”

de Bruyn was not the only one who couldn’t believe her eyes. Other students were also completely blown away by the dark atmosphere and light show.

Having been to other dances throughout the past three years, Senior Ameris Jimenez said, “This dance was a lot better than my past experiences with homecomings and winter formals because, of course, the decorations were a lot better.” 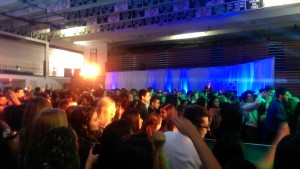 Boom Entertainment and B96 collaborated to provide Conant High School students the best Winter Formal of their lives. A professional DJ was present to provide music for dancing.  Songs varied from Michael Jackson’s “Billy Jean” to One Direction’s “Steal My Girl.”

“Bhangra,” an apparent favorite, was received with much enthusiasm by the students.  Students also enjoyed that fact that they could request their favorite songs to be played.

Junior Srini Iyer said, “The DJs were really skilled and knew how to appeal to the audience; they blended popular music with classics, slow with fast, skillfully and deftly.”

However there was one thing, students agreed, that could have been improved.

“There could have been a few more slow songs, but it was good dancing music regardless,” said Senior Mohit Bandla.

As the host of Winter Fest, Boom Entertainment gave the Conant gym a new face.  Students enjoyed themselves when dancing by the stage to great music, while others chose to rest their feet and hang out with friends in the lounge, out of the way of the partying crowd. Others who were more hungry for action other than dancing were able to take pictures at a photo booth or compete with each other in a giant inflatable knockout game. 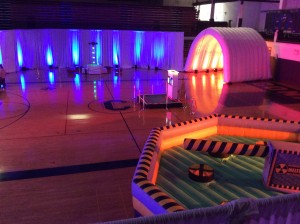 Freshman Colin Witt explained that he enjoyed this new type of set up. “This dance had more of like a club atmosphere to it,” he said.

Sophomore Sarah Sekulich also remarked that these activities were some of her favorite parts of the dance. “They should do the photo booth more often.  Everyone loves to look back at the memories!”

With about 50 people at last year’s barn dance, Winter Formal 2015 was considered a huge success with more than 1,000 in ticket sales.  Why did so many more people attend Winter Formal this year?  What changed?  According to de Bruyn, the answer lies in Student Council’s advertising strategy.

“The reason it was so successful is between all of Student Council’s constant advertising to appeal to everyone and make sure they knew how cool, new, and exciting this dance was going to be because of Boom Entertainment,” replied the StuCo President.

This appeal certainly worked.  Boom and B96 recently came to Conant themselves to get students pumped for the dance by mixing music in the cafeteria. Students were also able to request songs online.  Further, most students could not enter Conant High School throughout the past two weeks without receiving a Boom Entertainment bracelet, candy, or information card for the dance.  Having a spirit week didn’t hurt the advertising either, when much of the student population showed up in Hawaiian-inspired dress and pajamas last week. 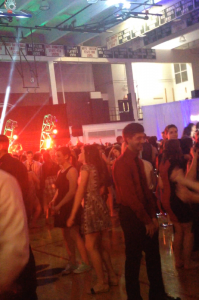 Well, this dance was certainly unforgettable, with energetic hosts on stage throwing out bracelets, giving away T-shirts, and getting the crowd involved.  For those who chose not to attend, students in attendance agreed that their $15 ticket was well worth the money.

Sekulich reflected,  “It’s definitely okay to not be a dance-going person.  It’s up to them if they didn’t want to go, but they totally missed out on a cool high school experience.”

And for those who chose not to ask anyone to the dance, Senior Isha Shah said, “Definitely take the risk, especially if you’re an upperclassman. It may be frightening to ask someone you know, but the reward outweighs the risk. And if you’re a girl, you shouldn’t be afraid! I asked Mohit, and he said yes!”

It appears that students at Conant High School will not be forgetting this once-in-a-lifetime experience anytime soon.

Check out the gallery above to see who your fellow Cougars attended Winter Fest with.  Also make sure to swing by the Boom Tour Website to see even more pictures of the dance.

Tweet us @conantcrier with your favorite Winter Fest picture or memory!

Christianna is a senior, and this is her second year as an editor for the Opinions section. She is involved in activities like the Conant Band, Drum Line, Girls Badminton, NHS, and Tri-M. Christianna enjoys anything involving the Marvel Cinematic Universe, Disney, Chipotle, and YA novels.