The menace of the Meninist 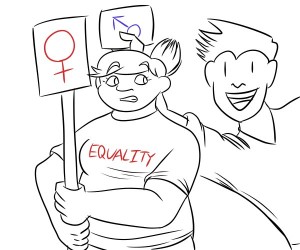 “Feminism is about men and women taking on the same domestic responsibilities and having equal opportunities in education.”

Twitter is the hub of voiced opinions, so we seldom open up Twitter without seeing a picture of a man with a long brown beard and mustache, more commonly known as the Meninist.  While some tweets, such as those on relationships, are comical and purely for entertainment, others pose as a stab at feminism. Either way, all the jokes have a biting edge to them that impede the feminist movement. From our take of the Meninist’s tweets, men are now feeling threatened by the idea that the female sex is beginning to level with, or even exceed the capabilities of men. But the irony of the matter is that meninism is not what men believe it to be. By supporting menimism, men are actually contradicting the belief of a supreme male gender.

For starters, feminism is all about equality, not female supremacy. Equality is about women being paid as much as men,  having equal respect in the work force and men and women taking on the same domestic responsibilities and having equal opportunities in education. Originally, the term “meninist” described a male advocate of feminism, meaning someone that believed in the same equality that women across the nation are fighting for. Of course, some men feel their masculinity is at stake by admitting they, too, are advocates. Others simply are not on board with the current movement because they feel that supporting feminism would decrease their power. In reality, this movement is about increasing women’s power, not stripping men of their power.

The man that created the original Meninist twitter page was, in fact, a supporter of feminism, who later admitted that his page was “sexist and wrong.” What he thought was originally good humor, he quickly found, gave other anti-feminists an outlet to spew sexist jokes left and right. The creator apologized, but the rest of his new followers seemed to take this spark and make a fire. They saw the Meninist’s act of trying to promote the male gender through extremely biased viewpoints, and turned the account into a parody of the relationship between men and women.

So what does meninism mean for the feminist movement? While some of the 140-character quips may seem harmless, they poke jabs at everything women are fighting so hard for; threatening to crack the foundation the feminist movement has been building for decades. Even in passing, building the habit of snarky comments that knock women down a peg will start to sink into the brains of men everywhere. Women have been able to completely revolutionize their futures through feminism, and it’s immature how men claim to be meninists simply by degrading the female sex. This account is not promoting equality, it’s making feminism stand still and preventing progress in achieving its goal.