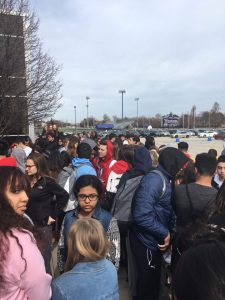 During fifth period yesterday, approximately 120 students walked out of school to protest gun violence in response to the recent Parkland, Florida school shooting. Students from Schaumburg, Fremd, and Hoffman Estates High Schools also participated in a walk-out for the same cause.

There was no disciplinary action for Conant’s walk-out participants, and their absences were excused by administration.

Principal Julie Nowak explained, “We certainly support students’ first amendment rights and freedom of speech. We, as an administration, can’t endorse a walk-out, but we can make sure that there is a safe space, and it doesn’t disrupt the learning process.”

Students said they participated in the walk-out as a way to bring about attention and change to the divisive national debate over gun control.

“I walked out because I wanted a change. Something needs to be done about how [easily] a gun can come into one’s hands,” Khushi Thakkar, ‘21, said.

Bridget Tobin, ‘20, added that she was motivated by a connection she felt to one of the victims of gun violence. She said, “I’m an Irish dancer, and someone in the dance community was a victim of the [Florida] shooting and died. I want to show unity with other students and protest gun violence.”

While some students thought the protest was effective in raising awareness for gun violence, others said the tone outside was not appropriate for the occasion.

Kaycie Bilicki, ‘21, said, “I’m happy that a lot of people are doing this, but at the same time I’m annoyed with people who choose to be disrespectful and play music during this because I think we should use this as a quiet time to remember those who lost their lives.”

Conant students have been discussing additional walk-outs, including one tentatively set for March 14, a date on which many walk-outs are planned across the country.

Many students said they would participate in another walk-out.

Tobin said, “I would do it over in a heartbeat. This issue is not something that can be ignored, and I truly believe that this is something important that I am not afraid to stand for.”

Nowak also said she wanted to convey her appreciation for students trying to make a difference. She said, “I’m really proud of the students that have reached out to me, and I’m in awe of their maturity and their vision. While it’s a scary time, it is very admirable that they are looking for a way to appropriately share their voice.”