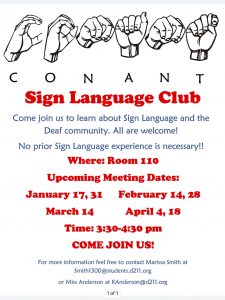 Raising awareness about the deaf community is one of the reasons that Marissa Smith ‘17, started Conant’s American Sign Language club recently.

Smith said the club connects with her plans for the future. She said, “I grew interested in sign language because my sister works with kids who are deaf or hard of hearing.” Smith plans to become a deaf education teacher and will be majoring in it at ISU next fall.

The Sign Language Club is sponsored by Conant Speech Pathologist Kelly Anderson. “I have a few students with hearing loss. One in particular only uses ASL to communicate, so I was personally motivated to learn a little bit more and support them,” Anderson explained.

Member Alene Robak, ‘17, had her own reason for joining the club. Robak said that she hoped it would “make me more knowledgeable and more grateful for what I have. I have the ability to speak and hear, which is a benefit.”

There was a process to make the club an actuality. Smith went to her counselor to share her new idea. Once it was approved and a teacher had agreed to sponsor the club, they held their first meeting.

The club has a few short term goals. One was to get started and to gain a following, which was achieved when several members attended the first meeting. The second short term goal is to do some volunteering within the deaf community and to help others, which they hope to accomplish throughout the school year.

Smith’s long term goal is that the Sign Language Club will carry on even after her graduation. In order to achieve this, she hopes more underclassmen will join and step up to take her place once she’s gone.

According to the National Institute on Deafness and Other Communication Disorders, “American Sign Language is a complete, complex language that employs signs made by moving the hands combined with facial expressions and postures of the body.” Sign language was created as a way to destroy the communication barrier with the deaf community. With the use of sign language, everyone has a voice, despite their disabilities.

The club plans to meet every other Tuesday for an hour after school in Room 110. They are actively seeking new members, with no signing experience necessary. The club and its members hope to inspire the Conant community and help make the deaf community more widely known.