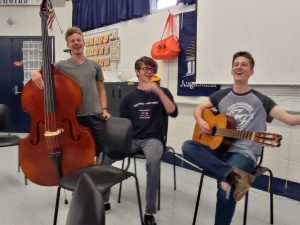 The new School of Rock club provides students the opportunity to form bands and improve their music skills.

Red Team Counselor and Co-Sponsor of School of Rock, Matt Wiley, said, “The sponsors make suggestions about how to improve their sound, how to name their band, how to market their bands, artwork for the band, recording music and a plethora of other topics that come up when being in a band.”

Wiley said, “The idea for School of Rock was inspired by the movie ‘School of Rock’ starring Jack Black, but also was birthed by how Conant High School and its staff are constantly thinking of ways to connect with students.”

He added that the sponsors wanted to share their semi-professional band experiences with the students.

So far, the club has about 22 members. Students are encouraged to join even if they can’t come regularly.

Wiley said, “Students at Conant are often involved in more than one club or activity, and some of our members have part-time jobs, so we are flexible to that. Part of being in a band is being there for your other band members and having good communication.”

Students joined the club to express themselves and experience a new playing style and environment.

Erika Terrado, ‘19, said, “I aspire to make music. Making music gives you a lot of freedom of expression.”

Rei Nelson, ‘21, said, “I wanted the experience of playing more untraditional than traditional music, which was how I was trained. I was amazed to be able to experience music and collaborate in a way I normally don’t, like playing rock and other genres.”

Students encourage others to join the club even if they don’t plan on pursuing music in the future.

Terrado said, “School of Rock is a good way to express your hobbies, especially if you aren’t looking into music as a career.”

Nelson said, “Similar to Erika, I am not interested in music as a career. I come to School of Rock as a way to connect with other musicians, play, and have fun.”

The sponsors plan for the club to have a big role in school events in the future.

Wiley said, “I would say the most important goal that the sponsors and I have for the band is for students to have fun playing music with each other, but we also hope that all members improve and then have a spot to showcase their talents either in Variety Show in the spring or elsewhere, like in a future band showcase.”