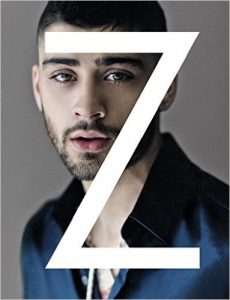 Zayn Malik, on the cover of his autobiography “Zayn.” Image credit: Amazon

Ever since heart-throb Zayn Malik left the biggest boyband in the pop industry, One Direction, fans have been desperate to understand what happened. Why did he choose to leave so suddenly, in the middle of a world tour? Would he continue to make music? His recently published autobiography, “Zayn,” gives insight on the new solo artist’s personality, personal life, self-motivations, and an overall sense of authenticity of who Malik is outside of One Direction.

While the media had assumed the book would be about One Direction’s secrets and the reality of the boy band’s management, Malik chose to go a different route. In fact, instead of bad-mouthing One Direction, he shows gratitude regarding his time in the band and the way it changed his life. As a fan, it’s relieving to know that he hadn’t left the band on wrong terms, and makes you even more curious to read on for the story behind the start of his solo career.

Giving insight on why he chose to leave One Direction was a great way to start the book because it answers the reader’s main question in a straightforward manner. Malik explains, “I’m going to show you as much as I can so that you can judge me on my own terms, not on what the press or anyone else says.” The brutal honesty is what really draws you in as a reader, as you start to connect with the voice Malik develops.

Malik focuses his autobiography on showing people that he strives to be more open with his music, whereas in One Direction he was restricted to a clear pop sound and wasn’t able to creatively contribute much of his R&B and hip-hop background. Addressing his decision to leave One Direction, Malik explains, “I want to be known as somebody who isn’t afraid to do what he wants to do, no matter what other people might say or think, and to do that I’ve got to be in control of my career.”

There is a chapter for every song Malik wrote for his debut album, “Mind of Mine,” explaining the background and influences behind each track. The chapters include pictures of his first scribbles of song lyrics for each track. These parts of the book clearly highlighted Malik’s attention to detail and the ways his background influenced his first album as a solo artist.

Malik also shows his artistic side throughout the autobiography by including pictures of himself in various settings and poses, polaroids, graffiti drawings, and handwritten notes of lyrics. These additions reveal Malik’s true personality– an artsy, focused, and sometimes quirky musician. As a fan, it’s interesting to see him opening up on a more personal level rather than only getting to know him through interviews. The book allows Malik to explore and describe the person he strives to become, and the reader is able to form an understanding bond with him.

Along with explaining his musical background and sound, he goes on to talk about some personal issues, such as going through anorexia while on tour. The biggest issue he discusses is anxiety and how it would affect his mental health to the point where he is unable to perform. He takes a more human approach to his lifestyle and the things that affect him everyday than what the media assumed when they blamed him for backing out without seeing the real picture.

Overall, the raw emotions and honesty that is poured into every word of the book creates a perfect gateway for fans to understand Zayn Malik as a person and as an artist.