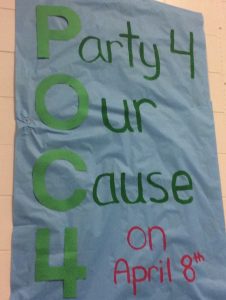 A new, all-district dance will be held this spring. The dance aims to raise money for Partners in Our Community, which helps underprivileged families in the District 211 community, and will take place at Conant from 6:00 to 10:30 p.m. on April 8. Tickets will be sold March 13-17 for $20.

Partners for Our Community is a non-profit organization that provides services to many people in the local area. Their goal is to help develop and strengthen the community. They provide services such as I COMPETE, which allow children to learn valuable skills by playing sports. Through Partners for Our Community–and Higgins Helpers, the local branch for the Conant area–students can get food, as well as have a safe place to play and get help with homework. Adults can get help learning English and preparing for the citizenship test.

Students from all five schools can attend the dance. However, Student Council Adviser David Moravek said, “Each school only gets 400 tickets because the dance is being held in Conant’s gym, which can comfortably hold about 2,000 people.”

Tickets to the dance will take the form of t-shirts, which attendees will wear to the dance. The shirts have the mascots of all five schools on them as well as the name of the dance. All the proceeds from the ticket sales will go to Partners for Our Community.

Moravek said that Party for Our Cause will be different from other dances because it is not only district-wide but also will feature student performances and an attempt to break a Guinness world record, which will be announced at the dance.

“Every year we will try to break a new [Guinness] world record at the dance,” Moravek added.

The dance will also include performances by the “ICompete” dance groups. These performances will be mixed in during the event. Pizza will be served towards the end of the dance.

Teachers from each of the five schools met to discuss and plan the dance several times. Student committees from each of the five schools were also formed and met at Palatine High School on Feb. 1 to discuss and plan the new event. The committees were made of a diverse range of clubs throughout each of the schools, including Student Council, National Honors Society, and Cultural Awareness. They will handle the marketing of the dance at their respective schools. Moravek explained, “Each school is trying to get as many clubs involved as possible to really make this dance a success.”

Several fundraising events will take place to raise money for Partners in Our Community before the dance. For instance, an annoying song will be played at each school on Monday, March 13, during passing periods and in the cafeteria until a certain amount of money is raised. When enough money is raised the music will be turned off.  The song for each school is chosen by another school; for example, Conant’s student committee will choose Schaumburg’s song.

Another example of fundraising is that food trucks will be at Conant the week of the dance, April 4-7, outside the school. Because of SAT testing, the trucks will not be available April 5.

Moravek believes the food trucks are a great idea. “It allows students who aren’t normally allowed to go off campus to do so and provides them with an opportunity to try different food places.”

“The goal this year is to get this event off the ground,” Moravek stated. Later, this event could grow into something bigger or even take the place of the winter dance.

As Moravek explained, “Winterfest totals were low for all District 211 schools, so next year Party for Our Cause may become the new winter dance with all five schools.”

“Next year, I hope to have the dance at a place like Harper College where there is more space so that more people can attend,” he added.

To learn more about the programs of Partners for Our Community or to make a donation, click here.