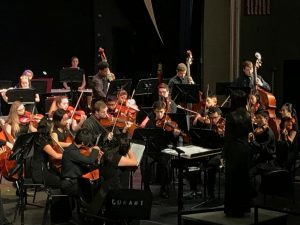 Conant’s winter orchestra concert was filmed by the Channel Six station in Hoffman Estates and will be posted on their YouTube channel as well. The concert was on December 13.

Orchestra teacher Devin Godzicki said, “A cable TV coordinator reached out to our department chair and wanted to broadcast the orchestra concert. Since I thought it was an interesting opportunity, I agreed.”

The concert was recorded instead of being broadcast live. It is the second orchestra concert this year.

Godzicki said, “Our first concert featured band, orchestra, and choir. This concert was mainly orchestra and was our chance to showcase our hard work the last few months.”

The orchestra played many types of music.

Godzicki said, “Our program featured music from the baroque, classical, and romantic eras, as well as Hanukkah, Arabic, and Christmas tunes.”

Most students were proud that the concert was being filmed and put online.

Ariella Peets, ‘18, said, “I think it’s great that our concert is being filmed. It helps promote the music department, and it makes it more convenient for people to watch our concerts.”

Leah Pope, ‘18, said, “I think it’s so cool that our concert is going online. It’s always great to be recognized for something, and I definitely believe that we are a group worthy of that kind of acknowledgement.”