Thailand’s plastic bag ban sets an example for all 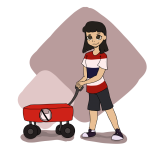 How many students actually use the blue recycling bins at the front of our classrooms? How many straws are wasted on our Dunkin Donuts drinks? In light of today’s environmental efforts, Conant students have a lot to learn from places like Thailand which started 2020 with a ban on single-use plastic bags in major stores.

Thailand is continuing efforts towards a complete ban on plastic bags by 2021. This government campaign, involving 43 department and convenience stores, is aimed at reducing waste in the sea. How does this relate to Conant? Simply put, it can be an example for our school, and even our community, to model after.

According to a Reuters article, Thailand’s Minister of Natural Resources and Environment Varawut Silpa-Archa said, “Thailand was ranked sixth among the world’s top countries that dumps [sic] waste into the sea… During the past five months, we were down to 10th… thanks to the cooperation of the Thai people.”

As a result, the first phase of the campaign, encouraging consumers to voluntarily refuse plastic bags from stores, has successfully reduced Thailand’s use of plastic bags by 2 billion, or about 5,765 tonnes in 2019. Can cougars, or Chicagoans, do this just as well?

Thai shoppers have responded to this plastic bag initiative with creativity and resourcefulness. From suitcases, pots, and even wheelbarrows, many have taken to social media to showcase their unconventional ways of carrying groceries.

Can you imagine if Conant students started using their backpacks to go shopping? Or, if students were required to bring reusable silverware for lunches? Thailand proves that when pushed to the task, people will do what is necessary to adjust to the environment. We can do this, too. Plastic bags can just be the beginning of our community to start taking climate change seriously.

The plastic bag dilemma looms larger every day as it litters the environment and endangers marine life. About 8,400 miles away from Thailand, shoppers around Illinois pay an extra 7 cents for a plastic bag under the Illinois Senate Bill 1240 and House Bill 3335.

But, Chicagoans already pay a city bag tax and are exempted from it. Governor J.B Pritzker’s proposed state budget for 2020 included a state-wide plastic bag tax. According to the budget, “The state can reduce the use of plastic bags in check-out lanes and generate $19 million to $23 million in new revenue with a five-cent-per-bag tax.”

It is speculated that bag taxes are working in Chicago and are encouraging people to use greener alternatives. According to “Skipping the Bag”, a report by the University of Chicago/University of New York research team in September 2018, the percentage of people who declined any type of bag rose from 8% to 21.5% after Chicago’s tax was implemented. One in three people bring reusable bags, as opposed to 13% before the tax. The tax also led to a 42% decrease in the average number of disposable bags used per shopping trip.

Thailand serves as an example to cities, nations, and schools that it is possible to find solutions to combat environmental issues, and as a reminder of our responsibility to take care of the Earth we live on. Should Chicago also move towards a plastic bag ban? What can Conant do about this issue? Let us know what you think in the comments.