Backing out of Paris Agreement endangers us all 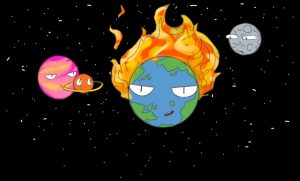 It started with scrubbing any records of climate change off of federal agencies’ websites. Now, President Trump is close to breaking the environmental boundary that protects our world from famine, uncontrollable weather, and temperatures that have the potential to kill.

The Paris Agreement, or Paris Climate Accord, is a global agreement that aims to decrease greenhouse gas emissions and global temperatures. President Donald Trump withdrew the United States from the Climate Accord on June 1. As of November 7th, Syria officially signed the Paris Agreement, leaving America the only country out of 195 that is not part of the agreement. Syria has been locked in a civil war for the past six years, a rational reason for the country’s previous absence from the agreement. Trump claimed that his reason for withdrawal is because the agreement was bad for America’s economy.

The consequences of not supporting the Paris Agreement will be far worse in the long run than any impact the Climate Accord might have on our economy. Since the effects of climate change were discovered in the 1950s, preventing global temperatures from going haywire has been a critical mission for humankind. In the last decade, we’ve experienced some of the hottest years on record, and not as a result of natural variables like the sun. There’s almost a complete consensus on the cause: 97% of scientists agree that global warming is caused by human-made emissions. The unseasonably warm weather and then the sudden plunge into frigid temperatures signal a problem larger than we believe. If we do nothing to stop global warming, the catastrophic consequences will affect us sooner than we might think.

Food prices have skyrocketed in the past decade and will increase further as temperatures make it more difficult to grow crops, raise livestock, and catch fish. Oceanic acidity and persistent rising temperatures pose a major risk to 90% of the globe’s reefs. Hurricanes Harvey, Irma, and Maria followed one after the other and left a devastating trail of destruction in their wake. Puerto Rico is prominent example of the catastrophic results of global warming, with parts of the American territory still without power months after Hurricane Maria.

The biggest challenge in fighting global warming is that people don’t believe it will affect them personally. Many do not realize how global problems will affect their children and grandchildren. This mindset has lulled generations of Americans into living passively and ignorantly, believing that they will die before climate change can affect them. This generation is the the first generation to experience effects personally. By the time today’s teens are in their mid-forties, global disasters such as record heat waves, malnutrition, sun-related skin diseases, poor air quality, extreme weather, and the extinction of once-familiar species will be viewed simply as a common and unstoppable occurrence.

With more help and awareness, we can minimize the damage that Trump’s decision heralds. By making an effort to reduce your carbon footprint and encouraging your friends and family to reduce their footprints as well, it is possible to make a difference in the face of rising temperatures. Don’t know where to begin? Start carpooling, buy locally, change out your light-bulbs for power-conserving LEDs, reduce your use of running water, unplug your devices when you leave the house, and most importantly, contact your politicians and encourage them to act on climate change.

It’s crucial that our generation works to combat the effects of global warming before it’s too late. With the world’s delicate environment already teetering on the edge, opposing the Paris Agreement is a massive step in the wrong direction.