Conant teachers reflect on the journey from student athlete to coach

Teachers are best known for one thing: teaching students. However, there is more to their life than grading papers and giving out homework. Allison Bauch, who teaches math, and Drewann Pancratz and John Powers, who teach physical education and wellness, are also coaches at Conant. They started just like student athletes at Conant and went from playing in high school and college to going on and coaching athletes from the same community they grew up in. Here’s how they started.

Bauch started playing softball, along with volleyball and basketball, when she was five years old and went on to play the three sports all four years at Conant. She also played softball on a travel team under Frank Hill, who coached her for ten years. “He was like a second dad to me. He was hard and straight and got down to it and I respected that about him,” Bauch said.

Playing sports throughout high school helped teach Bauch many valuable lessons, such as communication, overcoming adversity, teamwork, and perseverance. “I feel like all my traits were developed because of my experience with sports growing up,” Bauch said. 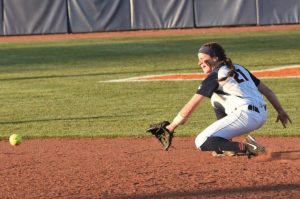 After attending Conant, Allison Bauch played softball at the University of Illinois before heading back to Conant to coach.

Bauch continued in softball and went on to play at the University of Illinois. “Playing in college helped me gain more knowledge and develop more perseverance and confidence in myself,” Bauch said. College gave Bauch more knowledge of the game and taught her grit and how to go above and beyond.

The impact of playing sports while having good coaches is what led Bauch to coach athletes as well. “I just want to be able to mentor and give them the confidence and everything I was given growing up,” Bauch said.

Bauch was recently named the varsity girls’ softball coach at Conant. She said her goal is to continue the legacy left by the previous coach, CathyAnn Smith. “I hope to create an environment for the girls that’s fun, competitive, and brings out the girls’ potential,” Bauch said.

Pancratz started playing volleyball when she was in fifth grade and started playing basketball even earlier. With her mom being a high school volleyball coach at Schaumburg High School and her dad and brothers playing basketball, her parents believed in having her try out sports at early age. “My whole life, their passion for sports kind of reflected and came on to me,” Pancratz said.

Pancratz’s mom inspired her to play volleyball after seeing her work with high school kids who all played at a competitive level. “I was around the older kids a lot, and I saw how successful they were based off of how hard they were working, and I just grew to love the game,” she said. Her brothers also inspired her to pursue basketball after watching them play in games and practices. Drewann Pancratz went on to play volleyball at Carthage College in Wisconsin after playing it at Schaumburg.

After playing basketball and volleyball at Schaumburg, Pancratz continued to play basketball and volleyball at Carthage College in Wisconsin, which she describes as “eye opening.” It showed her there was always room to improve. It gave her a chance to learn about her own skills and herself as a player as she was faced with challenges, such as competing against someone for the same spot, or pushing through when coaches were tough.

Pancratz believed sports were not only fun and exciting but made her a better student. “I think sports, any sport, it just teaches you a lot, socially how to act with your peers, it teaches you discipline, respect, responsibility,” Pancratz said. She felt that when she wasn’t in a sport she found it harder to stay on top of her work. “It just teaches you when things aren’t going well, how you respond,” Pancratz said.

Pancratz now coaches the Conant girls’ varsity volleyball team and the boys’ freshman volleyball team. She decided to start coaching to help teach high school kids the same things she learned. “I’ve seen through my parents, through my mom, through coaches that have coached me, how much of an impact that a coach can have on a kid,” Pancratz said.

Now as she coaches she tries to teach good values to her players such as time management and commitment that can translate into the real world. “We try to instill a lot of things in our athletes like doing what’s right when no one is looking and giving it a 110 percent even when the outcome is unknown,” Pancratz said, “and just really preparing them for life.”

Powers started running track and cross country in junior high and participated in other sports such as basketball, baseball, football, and soccer. However, he chose to pursue running mainly due to his height. “I was a little smaller, so those other sports were tougher for me to compete in, but in terms of running, regardless of my size, I was pretty good at it and I was able to be competitive, so it seemed like the best path for me,” Powers said.

Two coaches, Jack Gary, who coached Cross Country, and Ron Gummerson, who coached Track and Field, coached Powers in running at Conant and had a big impact on him. Powers said Gary really focused on building a community within the team and making athletes feel like they belonged. “He fostered the idea of having fun and playing the game and was really about this life long skill of learning,” said Powers.

Powers believed running and his coaches helped make him a better student and person. “Coach Gary and Coach Gummerson always coached about being a quality citizen and a person, and taking things you learned in our sport and applying them to every facet in our life,” Powers said.

The two coaches also inspired him to coach athletes in high school. “Watching them from day to day and what they did, it wasn’t just a job, it was their passion,” he said. Their passion reflected onto Powers and was a reason for his desire to coach.

Powers ran track and cross country in college at the University of Illinois. He describes playing at college as “learning how to compete.” It was all about outcomes, not the community being created, which gave him a mindset of only focusing on results in his first few years of coaching. “Over time, I realized it was more about the program and the community, which would lead to results,” Powers said.