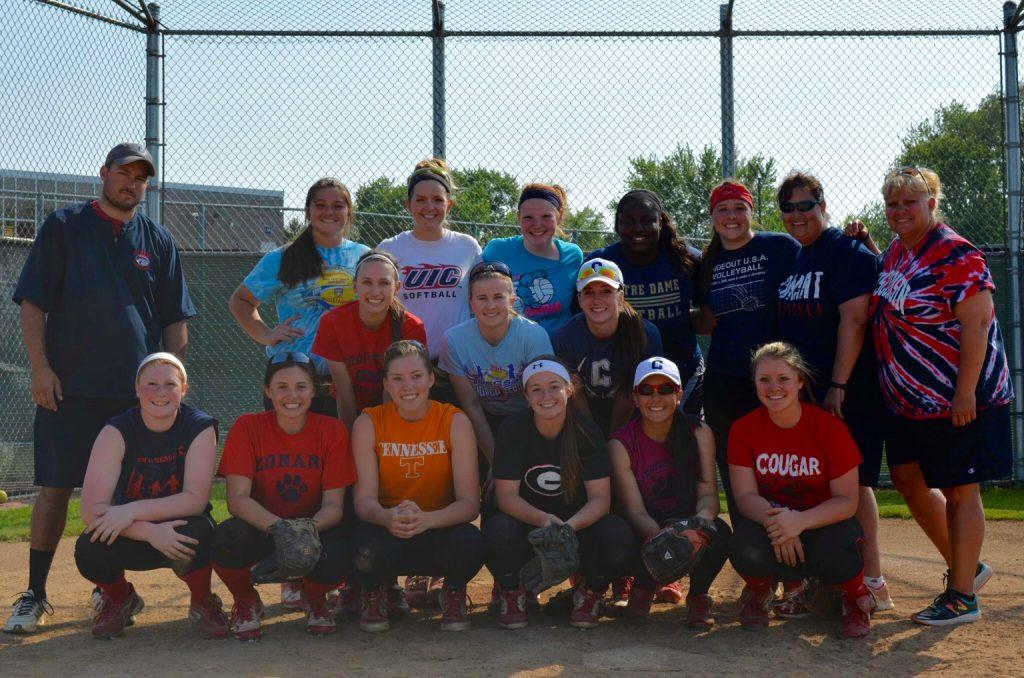 Coach Smith (top, second from right), and her team

Over 300 wins. Four MSL championships. Humility. Coach CathyAnn Smith has achieved all of these feats and continues to dominate on the softball field. The varsity softball coach locked in a 17-2 win against Glenbard East on May 24. This regional game is one of five that leads up to the state championship.

The girls’ varsity softball coach also won her fourth MSL championship on Thursday, May 19, in a 1-0 victory against Elk Grove High School, where senior Sarah Neuman pitched a perfect game.

The team has spent afternoons working on fundamentals and engaging in fun activities. One of the games the team plays is called 21, where the girls have to get 21 outs in a certain amount of time. Smith explained that it’s these kinds of days that make her job as coach fun.

“We practice as much as we can, but we also want it [softball] to be a sport that we love to play,” Smith said.

Being a varsity-level coach requires a certain expertise, explained Barbara Bostian, who was the varsity softball coach prior to Smith. Bostian said that a coach needs to have a certain skill set to get the job. She nominated Smith for the job 16 years ago.

“Smith is very enthusiastic, works hard, and knows the girls really well. These are the kind of qualities I like to see in a coach,” Bostian told the Crier at the May 19 MSL game.

Bostian remembered when girls’ softball was a small program, and it’s grown since then. The girls today have new uniforms, bats, and all the supplies needed to bring Conant a win. Bostian said she enjoys watching a game whenever she can because the progress amazes her.

“Smith is one of the reasons the team has transformed so much. When I am here, I can see just how dedicated she is about this. And she’s had three championships already,” Bostian said. “Also, her former players are always visiting her, which just shows how dedicated she is to softball.”

As a pitcher, Smith was trained to communicate with her teammates.

“When there’s game going on, it doesn’t matter if everyone is friends or not,” Smith explained. “You must communicate with your teammates and work together.”

Out on the field, every day, Smith works with her current pitcher, senior Sara Neuman. Neuman stated that Smith believes in improving with her players. Instead of imposing her styles on the girls, Neuman said that Smith has a unique respect for new techniques and offers advice as to how her players can become stronger.

Neuman said, “The simplest, yet most effective advice she’s given me is to play loose. The more relaxed our team is–whether it be pitching, defending, or hitting–the sharper our game is.”

Neuman said that she keeps this advice with her though every game, crediting Smith for her perfect game at the 2016 MSL conference championship. She thanked her coach for her pitch calls, and stated that without her help, “the outcome of the game could’ve been different.”

Neuman finished the game by striking out a player who will be her future teammate at SLU. Her perfect game and performance this season earned her National Athlete of the Week honors.

Senior Dream Aaron, the team’s catcher, agreed with Neuman about the importance of communication on the field. “As a catcher, I am the voice of the field. I also always have to have the pitcher’s back,” Aaron said. “Communication is key on the field. Coach always made sure I remember that.”

Aaron described how softball and Smith’s support allowed her to receive a four-year softball scholarship to Florida Indian River. She cited Smith as the reason she will miss Conant so much.

“She’s like a second mom to me. I went through a lot of rough stuff before joining the team and while being on the team, like homelessness,” Aaron said. “I will never forget how much she worked with me. She turned school into my home, which means the most to me.”

Smith not only works with her pitcher and catcher, but she spreads her time to make sure every player on her team improved. She begins practice by continuously batting the ball to the outfielders.

“I always have to be ready to catch the ball and get the opposing player out,” shortstop junior Lauren Grzelaksaid said. “So Coach’s practices really help me improve on that and communicate with the second and third basemen.”

Former player Hailey Rothstein, who played for the team from 2012-2015, agreed with Neuman and Aaron. “I think the most important thing coach ever taught me was communication. Communication is key.”

Above all else, Smith believes in being a team player. She encourages the girls to always cheer each other on. For example, right before every game, all the girls line up and clap for Aaron as she catches and throws back the ball to each basemen. Smith believes in team bonding.

“A team is like your family,” Smith said. “That’s why we always work on bonding. It really helps with communication on the field.”

Former player Elizabeth Linnane, ’15, remembered how Smith would take away the players’ phones during bus rides to away games to encourage conversation. Near the end, most of the players gave up their phones willingly.

“I didn’t like it at first,” Linnane recalled. “But by the end, I liked my teammates more than my phone.”

At the start of the 2016 softball season, over half the varsity team was new because many of the seniors graduated. While it was hard to adjust in the beginning, Smith worked out different solutions to pull the team closer. The players recalled going out to breakfast at Maxfield’s and having dance-offs in the field after practice.

“I think those will be the practices I’ll miss the most,” Aaron said.

It’s these strategies that have won Smith four MSL championships. Assistant Coach Kelly Wolff reflected on how far Conant has come in her 12 years as assistant coach.

“The first championship we won was in 2011. No one expected us to win; we were the underdogs. The girls played with heart and the coach was always with them,” she said. “She told them not to worry about the win, but to worry about the game. She focused a lot on pitching with [former players] Bri and Miranda Cavin.”

Smith agreed that winning is never the objective. She prefers to focus more on the teaching aspect of softball and also explains how softball can help prepare a person in life by emphasizing group cooperation. She advises her players to be team players and collaborate.

“On the field, we try to go beyond just catching and throwing a ball. Softball teaches the importance of the team,” Smith explained. “Whether you want to be a teacher, doctor, or something else, you eventually will be part of a team.”

Smith has been coaching varsity softball for 16 years. However, her passion for softball started before then. Smith began playing at the age of 11 and went on to pitch for Schaumburg High School’s team. At Grand Valley State in Michigan, Smith was an outfielder and relief pitcher. After her two years in Michigan, she moved to Illinois State University, where she continued her softball career and began studying teaching.

In addition to being a softball coach, Smith is an English and Special Ed teacher. She teaches E301, E302, Senior Composition, and Modern World Literature. Originally, Smith wanted to be a journalist, but she decided to change her path when she discovered during her sophomore year of college she had a learning disability called Dyscalculia, a difficulty in making arithmetical calculations.

Smith was inspired by a professor who helped and supported her through her disability by working with her hands-on. She now believes that a strong teacher is one who takes the time to understand the student and tailor his/her teaching styles to fit the needs of the student, something that she incorporates with her students daily.

“My professor took the time to talk to me and with me, not at me,” Smith said. “I’m very thankful, and I also try to teach my students the same way.”

Smith embodies dedication, compassion and a driven nature on the field. She is there to keep the pressure down and consistently helps her players be the best they can be, both on the field and out in the world.

“I don’t think I will ever want to stop this job. It’s who I am and who I want to be,” Smith said.