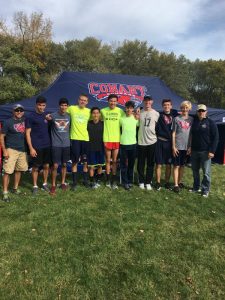 The boy’s cross country team after their Regional meet.

After placing 6th at the Busse Woods Regional, the boys’ cross country team qualified for Sectionals for the first time in three years. Sectionals will be held on Saturday, Oct. 28 at Busse Woods.

Head Coach John Powers credits the team’s work ethic and leadership for their success so far this season. He said that the seniors have taken the lead on that. “The seniors, they know the work that needs to be done,” Powers said.

Among the top performers at the Regional was Chris Floyd, ‘18, who placed 4th individually and has placed in the top 10 at every major meet this year. He has won All-Conference and All-Regional this year.

Floyd said, “The rest of our team has improved a lot this season. Especially in being able to work together throughout the race.”

“I think the last mile will determine which people go to State,” Floyd said.

For the team, Powers said that they are preparing for the race by focusing on themselves. They will also come up with race plans throughout the week and see which one works best.

“We want to finish the Sectional feeling we ran the best race we could of ran,” Powers said.

Even though the team itself does not expect to qualify for State, the Seniors on the team are looking to give it their all.

Sam Torrens, ‘18, said, “Hopefully Chris will qualify individually; that would be great. But for my personal goals, I am looking to give it my all for my last race of my high school career. I’m hoping to set a new personal record.”