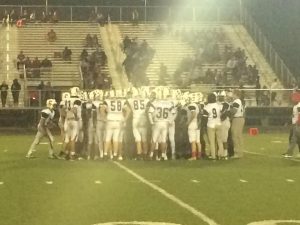 Conant huddles up before their game against Palatine.

Palatine coach Corey Olson said, “We started blocking people better. We started running the ball where we were supposed to be running and good things happened.”

After Stoudemire’s touchdown, Conant went on a three-and-out and had to punt the ball. On the ensuing drive, Palatine quarterback D.J. Angelaccio, ‘18, ran in a 4-yard touchdown with 5:04 left in the 4th quarter to give them a 21-14 lead.

On the next drive, Conant quarterback Kevin Polaski, ‘19, threw an interception to Palatine safety Tyler Perryman, ‘19. Angelaccio later went on to run in a 26-yard touchdown with less than a minute to go to seal the victory. Palatine missed the point after touchdown attempt, leaving the score at 27-14.

Conant coach Bryan Stortz said, “I don’t think we are finding ways to lose; I think we’re competing. Our kids have found ways to win; they have done things right, and we just struggle in key situations.”

Conant got the first score of the game on a 1-yard rushing touchdown from Jack Reiger, ‘18, with 9:23 to go in the 2nd quarter.

Palatine then scored after running back Jake Moertl, ‘18, fumbled the ball into the end zone. Offensive lineman Manny Juarez, ‘18, recovered the ball for a touchdown with 3:18 to go in the 2nd quarter.

The game became a defensive showdown for the rest of the 3rd quarter until Palatine began their 4th quarter comeback.

Stortz said, “I think our kids have fought harder than a lot of the teams we’ve played. We just come out on the other side of it.”

Conant concludes their season next Friday on the road against Barrington, a team that has won all eight of their games this season.