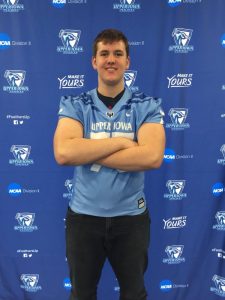 Edward Gosche during his visit to Upper Iowa University in December, a place he said felt like home.

After receiving scholarship offers for football from five schools, all either in NCAA Division I or Division II, CHS football center Edward Gosche, ‘18, decided to commit to Upper Iowa University (UIU) as an offensive lineman. UIU is a private Division II school in Fayette, Iowa.

“Everything there felt right,” Gosche said, who visited the school in December. Though the school is small and in a rural area, Gosche said that Fayette just felt like home to him.

Gosche credits many coaches for making him a better offensive lineman, including Freshman Coach Eric Jacobsen, who made sure all of his stances were perfect, as well as Offensive Line Coach Steve Polley, who was tough on him on every play.

Head Coach Bryan Stortz said, “What I saw in Eddy was a lot of hard work and perseverance; that’s obviously paid off for him here. He’s a well mannered, very good kid that does well academically. So I think Upper Iowa is getting a high quality individual as well as a good football player.”

“He’s one of the most consistent players. He’s never off task and does what he is supposed to do and just plays hard every game,” wide receiver Anthony Wachal, ‘19, said. He added that he will miss Gosche’s leadership and his ability to keep the group focused.

Besides being a star football player, Gosche is a four-year, three-sport athlete, competing in wrestling and track and field as well. He is also a member of Conant’s National Honor Society (NHS) and is an educational intern for math teacher and wrestling coach Chad Hay.

Hay said that his students like Gosche as an intern, and he is given respect by them. Gosche is pursuing a career as a high school math teacher.

Even if Gosche is not a starter as a college freshman, he still hopes to make an immediate impact for the team, whether during practice or on the scout team. Stortz said his advice to Gosche is to be willing to learn and to take constructive criticism, and that he will have opportunities if he believes in himself and works to the best of his abilities.

Gosche, being the last person in his family to play football, said, “It’s kind of sad. My mom is sad because she usually runs the pasta dinners and stuff but because my brother was an offensive lineman here. It’s like an ending of an era. But I’m really excited to further my football career.”

Gosche will sign his official Letter of Intent on Feb. 7, which is National Signing Day.