A look into Coach Modelski’s 30 years 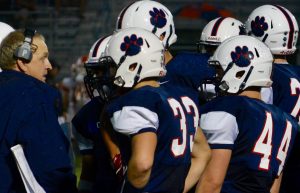 Fridays during football season are a hectic time: a fight between two schools for the glory, a storming fan section, thundering hits on the field, lightning players dashing all across the field. However, one man stands calm in the storm : Head Coach Bill Modelski.

Assistant Coach Eric Jacobsen described Modelski’s aura on the field as “all business, with a little bit of fun. He truly enjoys being on the field and doing what he does.”

After 30 years in the Conant football program, Modelski is retiring. Before head coaching for 12 years, he was an assistant coach. As head coach, he had a team of at least five behind him. Modelski said he has had a satisfying career with the best staff working with him. He added, “I have three guys on my coaching staff who weren’t even born yet when I started coaching here.”

Modelski has achieved a lot here at Conant. He led the Cougars to five playoff appearances, three straight playoff appearances before 2015, and a semifinal. Under his leadership, he has also helped send several players to Division Two and Division Three colleges, such as last year’s quarterback Kyle Bradley, who is a freshman at Central Missouri University. He also coached wide receiver Andre Holmes, who went on to attend Hillsdale College, a Division Two school, and who is now a wide receiver for the NFL’s Oakland Raiders.

One of Modelski’s favorite memories of coaching was “The 1989 semifinal team, when I was an assistant here. We took kind of a motley group of kids who were just hard nosed, and worked hard. We accomplished something that was really pretty unique.”

After having a great 2015 season, ending with a record of 6-4, the dominating senior class graduated. A new team was built up for the upcoming year. However, this year the Cougars endured a tough season, ending at 0-9. Assistant Coach Eric Jacobsen explained that even through the tough times, “You can tell he really cares. It bothered him, but at the same time, with the years of his experience, he kinda put it in perspective very well. I think that was kind of good for the younger coaches to see as well. It didn’t stop him from continually working to improve,”.

Wingback Jake Stumpf, ‘17, said, “Coach Mo was tough. But, he knew how it motivate us and try to bring out the best in us. He always told us we could get better through teamwork and determination.”

The game of football is built on the idea of teamwork, hard work, and being a family, traits Modelski implemented into the Conant program. Modelski explained that he appreciates the camaraderie of football. “I believe the real charm of football is the experience with your friends. It kind of brings guys together. It’s the kind of thing regardless of wins, losses, whatever, it…just bonds guys,” he said.

Coach Modelski’s son, quarterback Brian Modelski, ‘17, explained that bonding and growing the team as a whole was one of his dad’s goals. “‘My father impacted our team and the many teams he coached in a very special way. His goal was to make everyone a better player, but especially to make us better men. He sometimes had quotes to share at the end of practice, to help us think about our determination and our goals,” Brian said.

Jacobsen said one element of Modelski’s legacy is “the work ethic…When you’re on the varsity staff, you’re here six and half days a week. It keeps your organized and the concept of what it means to be personally responsible. He’s been a great coach of the program. And he’s really poured his heart and soul into Conant football.”

Brian Modelski added, “My father will truly miss Conant High School, and I know Conant will miss him. He had a great 30 years here.”

Trystin is a sophomore at Conant high school. She is excited for her first year as the Sports editor on the Crier staff. She is also a member of the Conant softball team, and part of the Schaumburg Sluggers Travel organization. In her free time she enjoys reading, listening to music, and playing catch with her siblings.