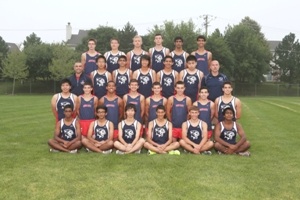 With a 9th place finish in sectionals, the boys cross country season ended without an invitation to Peoria. Although the team didn’t make it to state, as a whole they had a strong season. The team was very consistent, never finishing too far down in the rankings, along with steadily improving throughout the season.

Reflecting on this past season, Varsity Head Coach John Powers said, “We always make it a goal to improve on ourselves and get stronger as the season goes along. And we have accomplished that goal by having our strongest performance be at sectionals this season.”

However, the end of the season also brings some major questions about future seasons. Because the seniors made up the majority of this year’s team, there will be a lot of uncertainty surrounding the team next year.

“There were a lot of seniors that were very influential to our team. They provided leadership for our team and allowed us to remain consistent. The biggest thing now is to be able to fill that leadership void,” said Powers.

One of those seniors happens to be senior and Varsity Captain Zach Dale, who owns the record for the fastest 3 mile time in Conant history. Dale ended his Conant cross country career with a bang, finishing second in the state competition.

“I was not satisfied with the second place finish. I was, however, happy with my performance, that I was able to put in my maximum effort in competing in state,” said Dale.

Being a naturally talented runner, Dale was primed to have a big career in running. However, he became the second best runner in the state not just because of his talent, but also because of the effort he put in each day to develop his talent.

Powers said, “His work ethic is outstanding. He works very hard each and every day to improve himself. He has a lot of natural talent as a runner, but he works hard to develop that talent to the point that he can dominate the competition.”

Replacing Dale’s performance in events will be near impossible to accomplish next season.  That’s not the concern of the coaches, though. The biggest dilemma for the team as they head into next season will be to find people who will be able to step up and take on leadership roles.

“Junior Jason Guiliano did well [this season],” Powers remarked. “He improved a lot during his junior year. But since both of our captains, Dale and James Janzcy are out, we have a void that needs to be filled. However, if we can get everyone motivated to compete at a high varsity level, we will definitely be in good shape.”