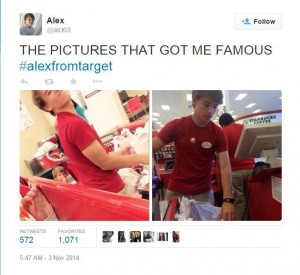 Alex Lee can owe his overnight fame to these photos taken of him while he was bagging groceries at his job at Target.

Imagine yourself in Alex Lee’s shoes.  You’re a regular teen, working minimum wage at Target.  The next morning, you wake up to your picture being blown up all over the Internet. Alex from Target has appeared on The Ellen Show as well as gained thousands of new Twitter followers. #alexfromtarget was trending worldwide on Twitter from just from one photo and an 11 letter tweet. Although this internet sensation entertained Twitter users, bored teenage girls, and curious parents, this trend has received an unnecessary amount of fame, and has raised some arguable questions. Is #alexfromTarget encouraging the invasion of privacy? Is #alexfromtarget a waste of our time?

Alex Lee owes his fame to a teenage girl who snapped a photo of him at the Target cash register as a joke to her friend. She then posted it on her Twitter account with the caption “YOOOOOOOOOO”, not knowing that the picture would be retweeted and favorited thousands of times. And thus, the Internet phenomenon began. When Alex appeared on the Ellen show, he confessed that he thought the Twitter trend was fake. He didn’t even know he had become a Twitter trend until his work manager showed him later that day.

Alex was photographed at his job without permission.  I think this kind of photography clearly violated Alex’s privacy. Although Alex embraced the internet fame he received, many others alike might not have. This kind of privacy invasion could happen to any retail employee in America. We live in a world where pictures are snapped all the time, with and without permission. Unlike Alex, I believe they may not enjoy this excessive and, in my opinion, unnecessary amount of attention. The worldwide trend of #alexfromtarget encourages people to photograph others without their knowledge or consent. Since many people want to gain both followers and fame, social media will motivate them to invade the privacy of others. Alex’s picture may not have been taken specifically to make him famous, but it sets a questionable example for people who want to be famous on Twitter.

Furthermore, Alex Lee is just an average high school Target employee, who seems to have an appealing appearance, but he is now receiving an enormous amount of fame. Alex has no known extraordinary talents, nor does he have a reason to be receiving all this attention, except for his good looks.  It confuses me that people still feel compelled to read all the tweets about Alex and watch Ellen talk to him.

Social media has brought us to the level where we spend our time simply marveling at an average, good-looking guy bag groceries for entertainment. Teens our age spend more time on Twitter and other social media than they do listening to the news.  We are wasting our time on brief fads like #alexfromtarget instead informing ourselves on the matters of the world or spending our leisure time observing people with developed talents. In today’s society we are giving our time, importance,and attention to things that won’t even matter in a week. Teens should be spending their time reading, learning, listening to music, or anything else that could would actually make an effect in their daily lives, instead of wasting their time checking out the new hottie on Twitter. With this thought, fame should really be reserved for people who deserve it.

Comment below, or Tweet @ConantCrier with #CrierOpinions with your opinion. The Crier would love to hear what you think!