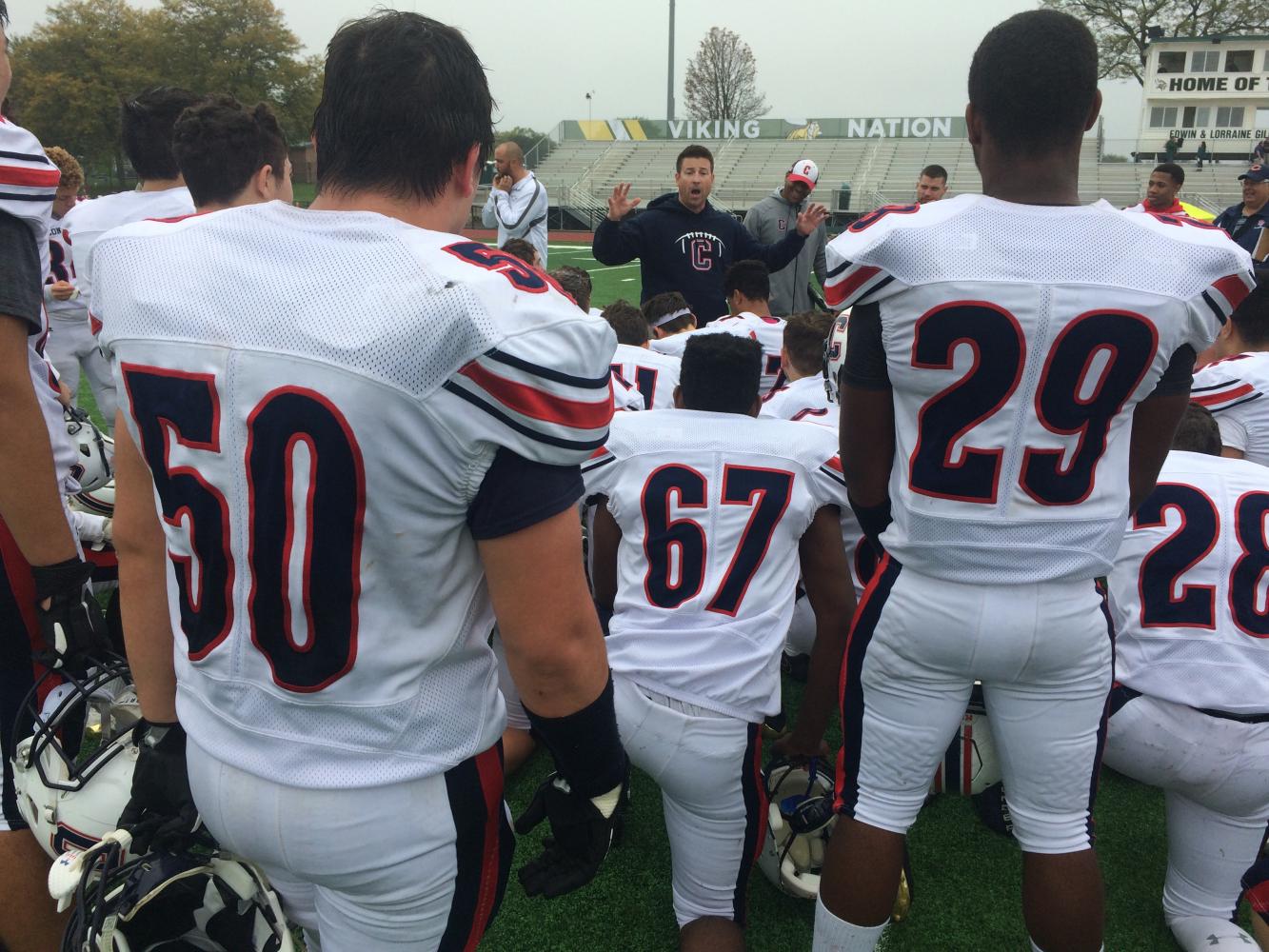 After coming from behind to beat the Fremd Vikings in the final seconds last Saturday, head coach Bryan Stortz congratulates his team.

After allowing a 20-yard touchdown pass to the Fremd Vikings, the Cougars, down 14-10, had 81 seconds to find a way to victory on Saturday.

The Cougars, starting at their own 17-yard line, drove down the field, using both running and passing plays, to set up a first-and-goal at the Vikings 4-yard line with just under 10 seconds to go after a roughing the passer penalty.

Quarterback Kevin Polaski, ‘19, found wide receiver Anthony Wachal, ‘19, in the corner of the end zone for a 4-yard TD pass with three seconds to go to win the game 17-14. With the win, the Cougars improved to 5-2.

Wachal said, “No nerves got through our head. We do this type of stuff all the time in practice. We got in a bad situation. We didn’t stress at all. Chip away, chip away, chip away, and we finally got in the end zone.” Wachal also had a 34-yard TD catch early in the quarter.

Polaski said, “I let [Wachal] have it. I let him make a play. He was just doing really well and we had to give it to him.”

Head coach Bryan Stortz said, “We had three timeouts. There was enough time and we just needed to be patient and not do something rash in that decision and just try to get in a position to take a shot, and I thought our kids absolutely executed tremendously.

“You know we work two-minute stuff every week, maybe not in quite that fashion, but I’m really proud to how our kids responded to all the adversity they went through in the last 48 hours.”

The game’s second half was played on Saturday, even though the first half was played the previous night. On Friday, at halftime, the Vikings were up 7-3 when lightning in the area caused a weather delay. When it was determined the lightning was going to last for hours, the game was officially delayed until Saturday at 10 a.m.

With five wins on the season, the Cougars are guaranteed a winning record in the regular season and are playoff eligible, but need one more win to officially qualify for the playoffs. If the team wins their next two games, they will win the MSL West.

“It doesn’t stop here,” Wachal said. “We got two more games up ahead. Palatine’s up next. We are looking at Palatine now.” Friday’s matchup against Palatine will start at 7:30 p.m. and is Conant’s Homecoming game.