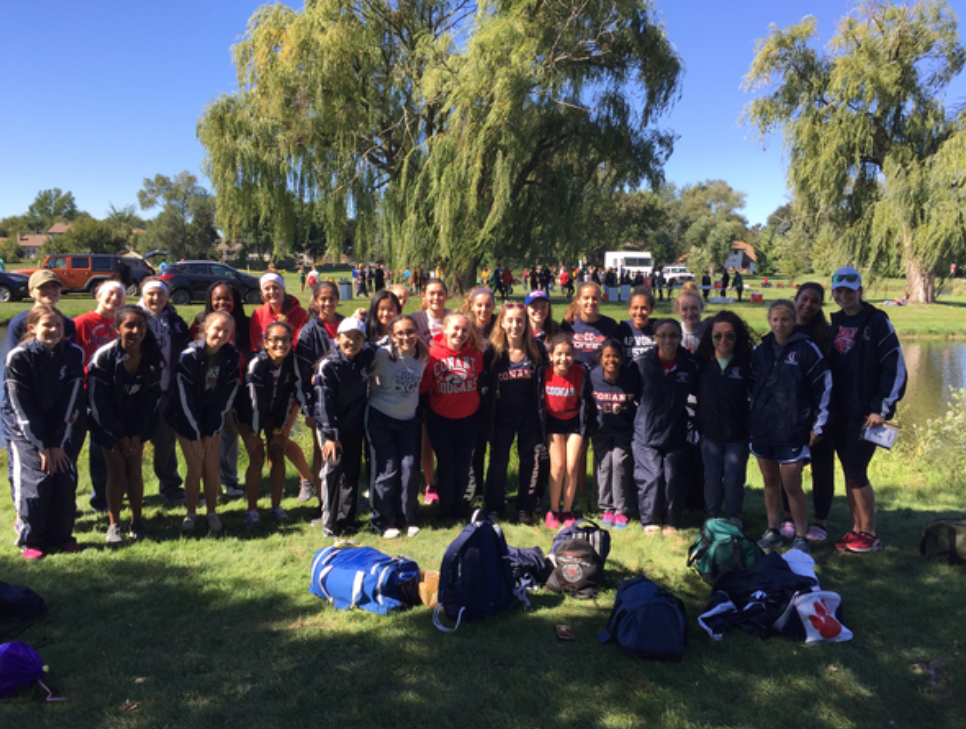 As the girls’ cross country season comes to a close, first year head coach Kalli Dalton said the team has shown improvement. The team just competed in their conference meet last Saturday, where the Freshman/Sophmore team earned sixth place and the Varsity team earned tenth. After rigorous training, 17 of the 23 girls ran a personal record.

“They’re running more miles, and their training is harder than they are used to, but overall they seem to be doing well,” Dalton said. “We’re intense when we need to be, but we have fun, too, like on the bus rides to meets.”

“Little by little we want to improve and make our name known back again within the conference,” Dalton said. She wants to help the team be competitive while also having fun running.

Although Dalton gained coaching experience by becoming head coach in track and field last year, there were still some challenges in the management of small details for cross country. “Everything’s still new, being the head coach. How to prep the girls before a race is a little different for cross country than it is for track,” Dalton said.

The runners have said they have seen the positive effect Dalton has on the team. “When Coach Dalton started as the new coach, I noticed that workouts occurred more often, and the difficulty level increased,” co-captain Gracie Palomo, ‘20, said. She said the harder workouts helped them improve as runners, which brought more energy and was beneficial to the team.

The girls have have said they see the program as “one big family.” Co-captain Jessica Meister, 19’, said, “I love that we’re always building each other up and never tear each other down, no matter if you’re the slowest or fastest runner on the team. We always want you to do your best.”

The two captains have also appreciated the hard work the team shows and how close the girls are to one another. “Conant Cross Country is very team-oriented, with plenty of team bonding opportunities,” Palomo said.

Meister added, “We have a lot more girls on the team now than years past, and I enjoy the amount of energy they bring to the team.”

The team has continued to grow and has more girls come out each year, whether they like running or simply getting in shape for another sport. Dalton, Meister, and Palomo are all confident that the program will continue to succeed in the future. “I feel like the program will continue to push everyone on the team to improve their running and personal self,” Palomo said.