Behind the visiting team’s sideline at the Conant football field, the phrase “Once a Cougar, Always a Cougar” is present on the signage. That phrase doesn’t normally have significance to the coaches or the players that visit Conant. However, tonight, when Hoffman Estates visits Conant, the phrase behind their sideline will have meaning to their head coach: Tim Heyse, ‘96.

His time at Conant

Heyse is remembered by his coaches at Conant as a small and tough athlete who didn’t use his voice or emotions to lead his teams. Instead, he was a leader by example.

Heyse, who played football, basketball, and baseball all four years at Conant, said, “On all three teams, we were pretty decent. If I worked hard, the other guys were going to work hard. Which for the most part — the younger kids see you working hard — that sets the expectation for them.” Heyse added that he remembers that when he was in junior high, he idolized Conant varsity players, which set the expectation for him. 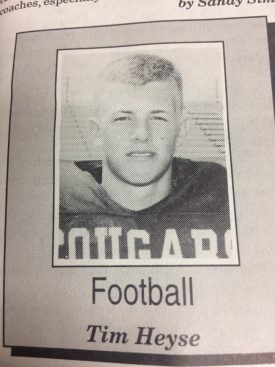 Quarterback Tim Heyse pictured in the November 1995 edition of the Conant Crier.

Dave Pendergast, who was Heyse’s head varsity football coach said, “He was a two-year starting quarterback for us. Really good leader, quarterback, really fun to coach, just because he was a really coachable guy, he was a student of the game.” Pendergast added he got everything he could out of his athletic ability.

Those who coached Heyse at Conant especially remember him for his toughness. Eric Jacobsen, who was a volunteer varsity assistant on the football team when Heyse played, said, “There would be sometimes where he would be at the bottom of a pile and I remember being on the sideline with the other coaches saying, ‘I hope he gets up, I hope he gets up’, and every single time he did. That’s the toughness factor. He knew his teammates were relying on him.”

There wasn’t a time that Heyse knew his teammates were relying on him more than during the final game of the 1994 regular season, which happened to be against Hoffman Estates at Conant. Heyse, who sprained his ankle the week before, knew he couldn’t let his team down — especially the seniors — for a game that would decide the conference and whether Conant would make the playoffs.

Heyse, who didn’t practice for the game until the day before, said, “I was a junior and I didn’t want to let those seniors down. So someway, somehow, I needed to get on that field and compete for them because I didn’t want it to be their last game, even though it ended up being their last game.”

Aside from his toughness, Heyse’s coaches remember him for his good decision making. Tom McCormack, who was Heyse’s head varsity basketball coach, said, “I remember he was always a guy we could count on to make a big shot at a crucial time and usually from distance.” McCormack added Heyse’s smartness, toughness, and skill have helped him become the coach he his today.

When Heyse graduated from Conant, he knew that he wanted to stay in sports and become a coach. Heyse went to Western Illinois University (WIU) to earn his degree in physical education.

His time at Hoffman Estates

“I love it. I wouldn’t change a thing,” Heyse said. “Just being a difference in kids’ lives and helping them out in tough times, seeing them succeed, being a father figure for them. I’m still in communication with a lot of my ex-players, which is always a good thing.”

Heyse continued coaching football as an assistant until the 2017 season, when he was hired as their varsity head football coach on his second attempt applying for the job.

Pendergast said, “I thought it was great. I would have been surprised if he didn’t become the next head coach at Hoffman based on what I had heard and what he had achieved. It looked like he was the logical choice and certainly hasn’t proven anybody wrong with the great success he’s had.”

During Heyse’s first year as a head coach, he took his team to the 6A state semifinals before losing to Prairie Ridge. This season, his team started off 6-0 and are currently 6-2 heading into Friday’s game.

The toughness that Heyse exhibited at Conant has turned into his football team’s motto: “Tough People Win.” The motto is designed to make the team’s players mentally and physically tough, which in turn gives the players confidence to believe they can win every game.

Heyse is not the only Conant alumnus on his coaching staff, as Paul Moersch, ‘01, is the team’s strength and conditioning coach and Eric Gdowski, ‘07, is the team’s running backs coach.

Because Heyse first started returning to Conant to coach games 17 years ago, he said it isn’t as special for him to come back as used to be in his earlier years. However, his connection to Conant hasn’t faded away. “I want Hoffman Estates to win every game they play in every sport, and I want Conant to win every game except when they play Hoffman,” Heyse said, who will also have his two kids attend Conant as well.

Janus said, “Coach Heyse is a great leader and relationship builder with students, athletes, and staff. He has great knowledge and shares his wisdom to students in a way they will understand best.”

Friday’s game will mark the annual battle for the Mayor’s Cup, which Hoffman Estates has won the past three seasons. As Hoffman Estates takes the field, Heyse will be reminded by the phrase behind his sideline: Once a Cougar, Always a Cougar.

Heyse said, “There’s a lot of tradition here. A lot of good players, a lot of good people. I’m happy they’ve turned things around after a few bad years.”