Turnovers big in loss to Evanston 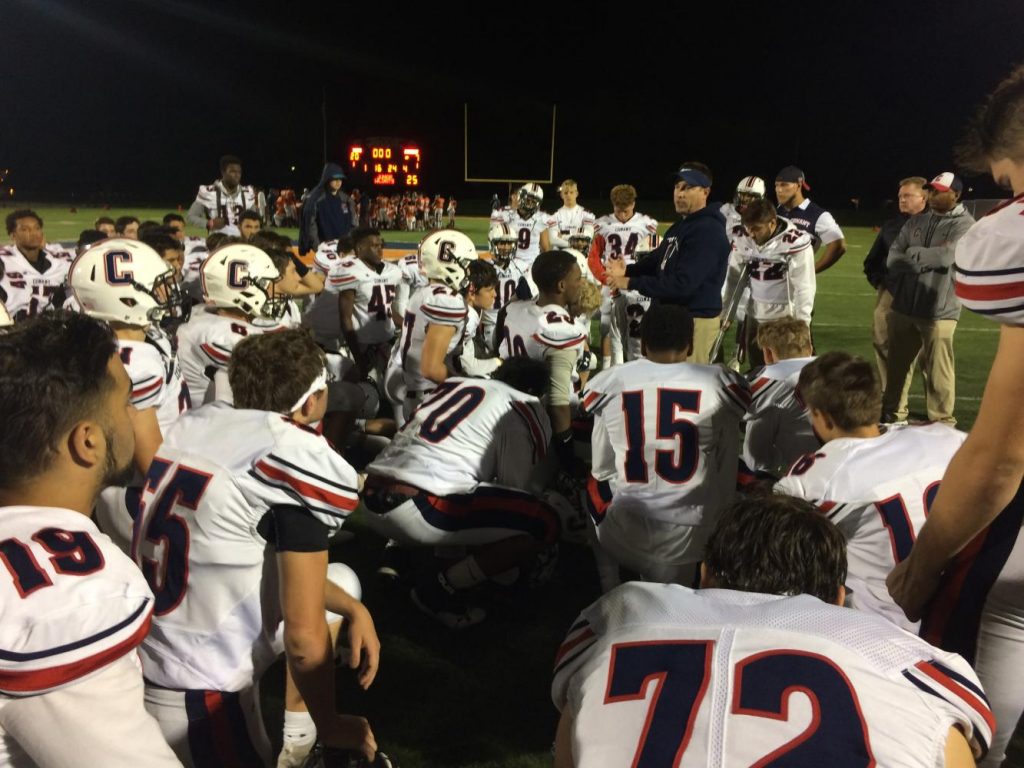 After losing 20-7 to Evanston, head coach Bryan Stortz talks to his team about the importance of ball security.

The Cougars gave up two touchdowns in the first half, both off of turnovers. In the end, it cost them the game, as they lost to the Evanston Wildkits 20-7 on Friday night.

The trouble began early in the second quarter when captain and quarterback Kevin Polaski, ‘19, fumbled the ball on the Wildkits 40-yard line. This led to a 1-yard rushing touchdown by Wildkits running back Quadre Nicholson, ‘20, with just under seven minutes left. Soon after, Polaski fumbled the ball again, this time at the Wildkits 48-yard line. Again, Nicholson scored a rushing TD, this time three yards out with under a minute left in the quarter.

Although Polaski committed the turnovers, including an interception late in the game, the issue of ball security is a team concern, according to head coach Bryan Stortz.

“It’s an emphasis daily in practice,” Stortz said. “Obviously I’ve got to do a better job and find ways to improve our kids in that area because it cost us.” Stortz added that the team has instituted about three to four ball security drills this year, but will look at finding more ways of emphasizing ball security in practice before their next game.

Polaski said, “I just hope [the coaching staff] uses me for an example. We see it in a game, we just got to get better at it and execute and just take care of the football.”

Due to the turnovers, the defense was put in tough situations throughout the night but did a great job, according to Stortz. “Our defense for a while did a great job, but they can only be on the field so long and make so many plays, and the offense has got to be able to respond,” Stortz said.

Defensive back Ryan Schar, ‘19, said that for the coming weeks, the defense needs to get a couple of turnovers each game–they had none on Friday night.

Running back Malik Frederick, ‘21, scored the Cougars’ only TD of the night on a 59-yard run just a minute and 30 seconds into the second half. Nicholson scored a 24-yard rushing TD with under two minutes to go in the game to conclude the scoring.

This Friday, the Cougars play their first home game of the season against Maine South, who made it to the IHSA (Illinois High School Association) Class 8A Semifinals last year. On preparing for the tough opponent, Stortz said, “We are going to do what we feel best at and try to find what they do extremely well — try to take those things away, make them get deeper into their playbook, and play to the best of our ability.”