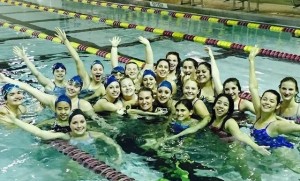 Despite the challenges of not having a pool this season, the girls swim team has managed to break several school records and take a trip to the State competition.

“Commuting and the practice times have been the biggest challenges.  We had the mentality that it just was what it was and we had to deal.  Realistically it didn’t affect us much, and I think it kind of brought the team closer,” said varsity Coach Justin Bickus on how the pool situation affected them this year.

The team’s bonding has also brought them a good deal of success. Apart from the best invites Coach Bickus has seen during his past eight years at Conant, the girls broke many school records.

Bickus also explained that Cicero was part of the 200 Medley relay and 200 freestyle relays that broke school records with Paulina Wolska, Lea Cejvan, and Sam Wooley.  Sam Wooley also broke the school record in the 50 freestyle.

On top of breaking many records, many of the girls qualified for State. Emily Weingart qualified in diving, and Cicero qualified the 500 freestyle as the sectional champion.  The 200 free relay also qualified.

“This was the first time we’ve had a relay team make it to state in 18 years, so it’s pretty impressive what they were able to accomplish,” explained Coach Bickus.

At state, Allison Cicero placed 18th in the 200 individual medley, and 19th in the 500 freestyle. Emily Weingart placed 29th in diving, and the 200 freestyle relay placed 35th.

Overall, Coach Bickus felt like the girls had a positive attitude and drive throughout the season. Looking forward to next year, Coach Bickus says, “Time drops and improving performances are always our prime goals for everyone on the team.  We will be a fairly young team next year, but we have enough experience coming back to compete. I would like to see a few more of our records get broken next year. I can see at least two more coming down once we get our new pool open.  That would give this group 9 of 11 of the varsity swimming records here at Conant.”

Ashley is the a junior and the sports editor. She joined the staff sophomore year as an assistant sports editor. Ashley is also involved in band, lacrosse, JCC, and national honor society. In her free time, Ashley worships Jennifer Lawrence, shops, and eats potatoes.