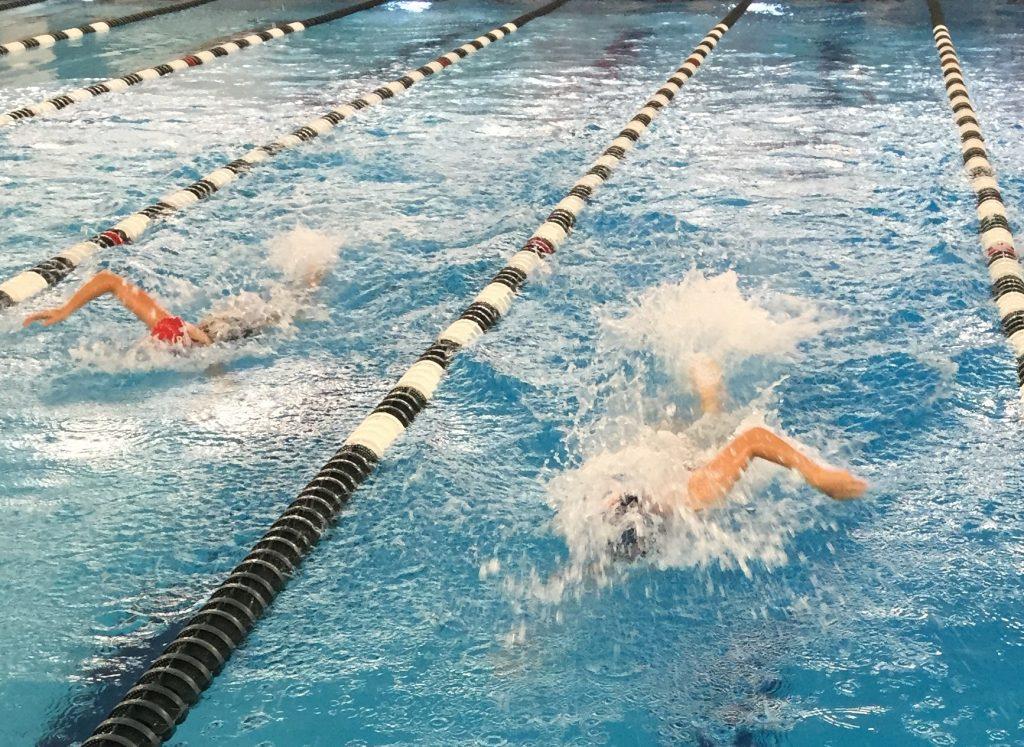 Aly Wooley during her swim.

The varsity swim team recently had a memorable victory against Palatine High School, winning 105-80. This win puts the Cougars at 4-2-1 this season. With conference, sectionals, and possibly state in the near future, the Conant Swim Team is focusing on a successful end to their season in November.

According to Head Coach Justin Bickus, Palatine High School has been a tough competitor for the last five or six years.

The swim team is concentrating on upcoming meets. Bickus has told the swimmers what they need to do in order to reach their goals for the end of their season.

Captain Lea Cejvan, ‘17, explained how the team’s goals get more intense later in the season. “A challenge toward the end is to keep a positive mentality and to keep going,” Cejvan stated. “Any meet that we have… we have to stay focused and pay attention to how we’re swimming and what we need to do to reach our goals. So I think that’ll be the hardest part, trying to get everyone together for that final push as we finish off the season.”

Personal goals vary from trying to get a state time or to swimming faster. Sarah Erne, ‘19, mentioned her goals and what she’s trying to improve. “I just want to improve my time, work on my technique, and help my relay team do well. I’ll try do that by trying my best to listen to what Bickus has to say about how I swim and fixing things based off of what he says,” Erne said.

Last year, Cejvan was very close to making it to state and hopes a positive mindset will get her there this year. “My personal goal is to make state time in the 100 breast,” Cejvan explained. “When I think about it, I think ‘yes I can do it,’ but remaining positive is the biggest part of it. If you start thinking that you can’t do something.”

This team’s support for each team member helps them in the long run. Erne said, “We do a lot of team bonding, and we cheer each other on while other teams keep to themselves. We keep everyone in a competitive attitude, help each other get ready for games, and make sure that everyone is ready to win.”

Bickus is proud of the team and makes sure that everyone knows what they need to do and how they’re going to reach their goals by the end of the season. “It’s a really good group of girls to be with,” Bickus said. “They work hard… and they seem very close. They push each other in the water, but they’re also supportive of each other at the races, even though they are competing against each other a lot of times.”