Baseball’s Deshazer and Taylor headed to the next level

“Everyone is going to be a successful high school baseball player [if playing] at the next level, so you have to prepared to not be successful right away,” said social studies teacher Bruce Hildabrand, who played baseball at the University of St. Francis.

The numbers suggest that, as of the almost 500,000 high school student athletes who currently play baseball, only 7.1 percent will go on to play NCAA baseball, according to NCAA research data released in March of 2017. Conant has two senior baseball players moving on to college baseball: shortstop C.J. Deshazer and outfielder Ian Taylor. 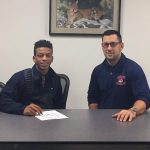 Deshazer, a 5’10” 160 -pound shortstop, will play at Heartland Community College in Normal, Ill. The NJCAA Division-II program has sent 15 players to professional baseball since its inception in 2008, and about 90 percent of their previous players moved on to four-year schools to continue their collegiate career.

This is one of the major reasons why Deshazer decided to attend Heartland, as he has aspirations to attend a four-year school and to be selected in the MLB Draft. According to the Conant Baseball Record Book, currently only three Conant players have ever played professional baseball. Those players were Zac Doan, Kevin Koski, and Austin Wright.

Deshazer received offers to play baseball from Michigan State and Valparaiso, as well as other NCAA and NJCAA schools. “I got to get a little bit bigger, so I thought junior college would be the right choice for me,” said Deshazer.

“I don’t know what my career will be after baseball, so that is another reason why I chose Heartland; it’s a junior college so I’m sure it give me the right route I need to take.”

Deshazer also said that he felt like Heartland was close enough to home to where his parents can see him play often.

The success Deshazer has seen as an athlete and a baseball player has not come without struggle, however.  Deshazer has scoliosis, a disease that causes him to have a weak back.

“I don’t tell many people about my disease because it makes people think I’m less athletic, even if I’m not,” said Deshazer. Deshazer has played basketball all four years at Conant and football his sophomore year.

The disease does not impact Deshazer’s speed, which he considers his number one strength and expects to improve on more in college.

“This quickness also translates into bat speed from both sides of the plate, which is going to be a huge asset for him in college if he can get his strikeouts down,” said teammate Payton Kaye,‘18.

The team will certainly miss Deshazer. “C.J. is someone with good character. He’s a good leader on the team, so someone will have to step up and fill his shoes,” said teammate Cole Kilty,‘18.

Both Deshazer and Taylor have greatly impacted their teammates in positive ways. Logan Smith,‘17, said, “Whenever they see me doing something wrong with what I’m doing, they try to help and fix it as much as possible. Whenever I’m down about a play or an at bat, they’re the ones to pick me up.” 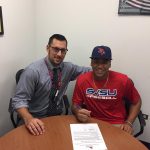 Big factors in his decision were receiving a full scholarship and that Saginaw Valley State is ranked in the top 20 in the nation in housing by the website Niche. Taylor will major in political science.

Taylor describes himself as an overly aggressive player whose strength is his high level of offensive production. “I’m able to use all parts of the field and have the ability to drive the ball with power,” said Taylor.

During summer ball between sophomore and junior year, Taylor had a .411 batting average and hit three home runs, three triples, and 12 doubles. “This was when I realized I was good enough to play college baseball,” said Taylor.

Mike Ryan, the owner and director of player development of Fastball USA, a baseball academy in Schaumburg, has been his most inspirational coach in his life, said Taylor. “Mike Ryan taught me how to respect the game, how to play it at 110 percent, and opened my eyes on how baseball was a game of failure,” said Taylor. Ryan coached Taylor from his freshman to junior year.

Taylor wants to be known as more than an offensive power hitter. “The weakest part of my game is that I struggle hitting off-speed pitches,” said Taylor. “My defense is starting to clean up, but it is not nearly where I want it.”

The team will miss Taylor as well.  Teammate Jack Reiger, ‘18, said, “ I’m really going to miss playing with Ian, as he is for sure one of our best hitters.”