Most wouldn’t expect a 40-year old to compete at a collegiate wrestling tournament, facing young wrestlers in the prime of their careers. However, on Dec. 29 at the Ken Kraft Midlands Championships at the Sears Centre in Hoffman Estates, Conant math teacher and head wrestling coach Chad Hay did just that. 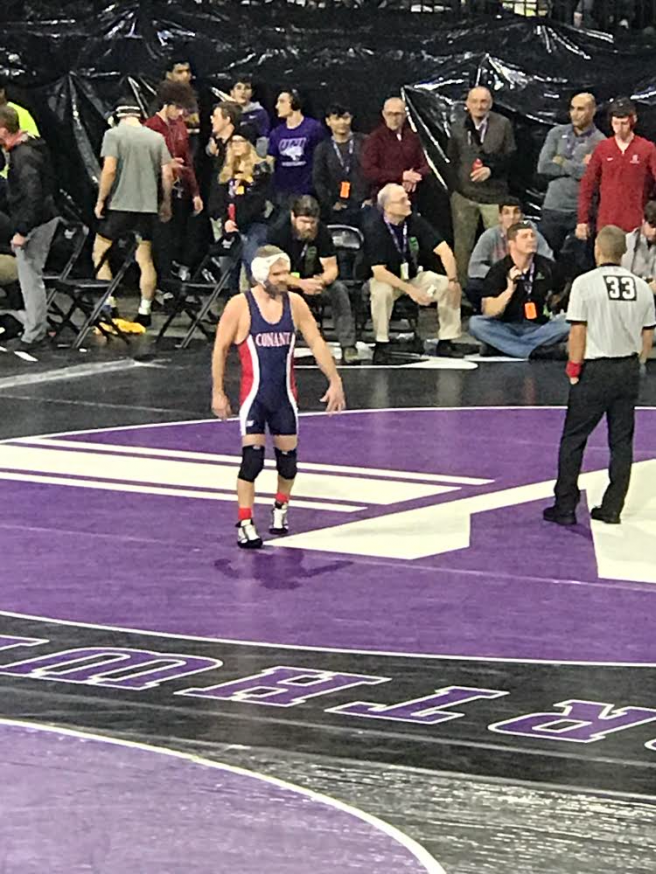 On Dec. 29, head wrestling coach Chad Hay competed in the Ken Kraft Midlands Championships at the Sears Centre in Hoffman Estates. At age 40, Hay was the tournament’s oldest participant.

When Hay decided to petition and compete in the tournament again, Conant Athletic Director and Midlands Championships Administrator John Kane said he thought Hay had lost it. “He’s 40-years old, so he hadn’t wrestled in quite a while. But I also knew he was pretty excited about it, and I know when he says he’s going to do something, that means he’s going to do it,” Kane said.

Hay began training for the tournament in April when he started lifting for the first time in 15 years. Assistant wrestling coach Jim Harder put together a training program for Hay that changed every six weeks. After starting with a pure strength perspective by lifting weights, which Harder said was for Hay to get stronger, Hay then moved into applying that strength for wrestling by lifting unbalanced water bags, pushing sleds, and various other exercises.

During this time, Hay also started cutting down his weight. Hay wrestled in the tournament in the 141-lb. class but started his training at 172 pounds. “I got myself back as strong as I could get, and then cut down,” Hay said.

“Whenever we would do drills, he was drilling there right there with us,” DeFrenza said. “He was with groups with me and Nicky and also, [he] was putting in harder positions for himself, trying to make himself better, and that’s why we were there helping, because we were putting him in those tough positions.”

After eight months of training, the tournament finally came.

An old feeling had come back to Hay when he arrived at the Sears Centre the day of the tournament.

“You get the all the feelings from a long time ago come back. You know, making weight. Just looking around and being the oldest guy in the competition was kind of funny,” Hay said. Hay’s warm-up partner from college, Twam Pham, was his warm-up partner for this tournament. “That was totally surreal,” Hay said.

For this tournament, Hay’s coaches were his dad and brother. Other people supporting Hay were 30 Conant wrestlers working the tournament, his wife and daughters, his mom, friends from his hometown, and Kane.

During the first four minutes of the match, Hay felt pretty good but then started to struggle with the pace, which led him to lose 16-4.

Even with the loss, Hay competed in another match against The University of Buffalo’s Kyle Todrank. Hay lost that match 14-3, ending his time competing in the tournament.

“I was impressed with how long [Hay] held in there in his match, how he wrestled. To really be able to battle against a kid in college that’s probably 19, 20, 21, I was really impressed. He was pretty lean and mean. He was ready for that match,” Kane said.

DeFrenza said, “It takes a lot of guts to do it, period. These kids are at the peak of their athletic ability and these are the best kids in the nation as well. I really don’t have any shame on my coach. He competed as hard as he could, and I think he did everything in his power to win those matches.”

That May Not Be All

“It would be a cool feat,” Hay said. “When I was in the tournament in college, I placed twice. I took seventh and eighth. It wasn’t like I was going to be in the record books for most titles or anything like that, but it would be kind of cool to be the first person to wrestle in this tournament four consecutive decades.”

Unsurprisingly, Hay is planning on doing just that. “I feel like I got a good base now, lifting for that long after not having done that in a long time. I feel like my base shape is good, so I can always add on that. Over the next couple of years, I would like to keep getting stronger and improve in that way and then we’ll see if we do it again,” Hay said. If Hay does compete in the tournament again, he will aim to be placed in the 133-lb. class, where he wrestled in college for his last two seasons.

Harder said, “I think [Hay] wants to do it again and obviously I’ll be there for him again. I think we would take a different approach, not completely different, but I think we’ll try to bring in more older wrestlers for him, find opportunities outside of possibly our room where he could, obviously he couldn’t do it on a daily basis, but at least once a week have the opportunity to wrestle stronger kids.”

For now, Hay will be leading his team into the most important part of the season, as Regionals are on Feb. 2 at South Elgin.