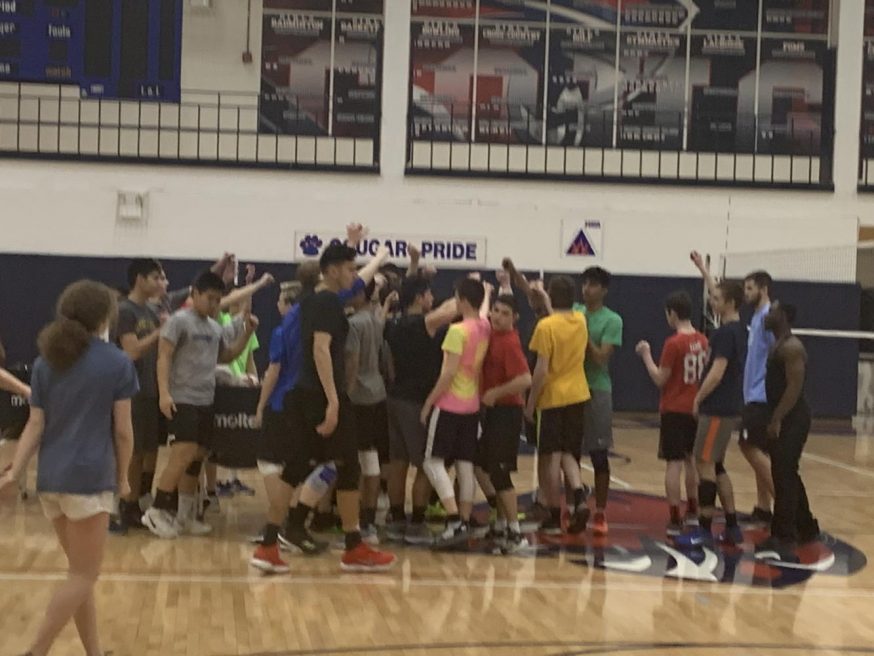 The boys’ volleyball team during a practice before the season. This was the first season where Conant feeder schools had boys volleyball.

For years, the boys’ volleyball coaches at Conant have had to train the vast majority of freshmen on the basic fundamentals of the game when tryouts begin for the season.

That might not be the case anymore, as this year, District 54 junior highs, which feed into Conant, added boys’ volleyball as a sport.

“Now having guys come in who have played team, organized competitive volleyball at the junior high level, they will already be coming in with some of those basic skills and knowledge about the game,” head boys’ volleyball coach J.C. Brown said.

The first season went well at the junior high level, according to Brian Donlan, who is the seventh grade coach at Mead Junior High. “Throughout the season, they grew a lot, they had a lot of fun,” Donlan said. “There’s just more excitement about volleyball at junior high level. Kids are talking about it, and some of the boys that didn’t try out this year are thinking about it and trying out again.

“Just seeing that excitement growing was our goal this year and it turned out really well,” Donlan said.

Donlan added that it took about three weeks for the players to get the basic skills down, and that the level of inexperience and improvement of teams throughout the seasons was consistent between the junior highs.

The junior highs and high school have talked to each other throughout the season. “Before the season started, I reached out to them and said ‘Hey, I would like to come into practice and talk to the boys a bit about their season and about high school volleyball’. I then went to the tournaments, the seventh and eighth grade tournaments, and talked to the coaches there and talk to boys after they won their matches,” Brown said, who also invited junior high teams to come out to a Conant game.

The opportunity of giving a boys a chance to play volleyball earlier in school is expected to improve the performance of Conant boys’ volleyball, as well as Schaumburg and Hoffman Estates’s High School teams, who also have District 54 schools feeding into them.

“If we have two years of experience for these kids before they get into high school, they’ll know more and hopefully the high school coaches will be able to do more to help them along in their volleyball careers,” Donlan said. Brown added that this added experience might help Conant be competitive with teams they currently aren’t competitive with.

Players who are currently on the Conant boys’ volleyball team are excited for the addition at the junior high level, as they also agree it will make them more competitive. When referring to what it would have meant for him if had volleyball in junior high, middle blocker Sean Beckman, ‘21, said, “I think I would’ve been more fundamentally sound and a better passer, setter, and just smarter.”

There has been discussion throughout District 211 that having boys’ volleyball at the junior high level can help grow the high school programs so much that there will be enough players for a Freshman B team in the next couple of seasons, according to Athletic Director John Kane.