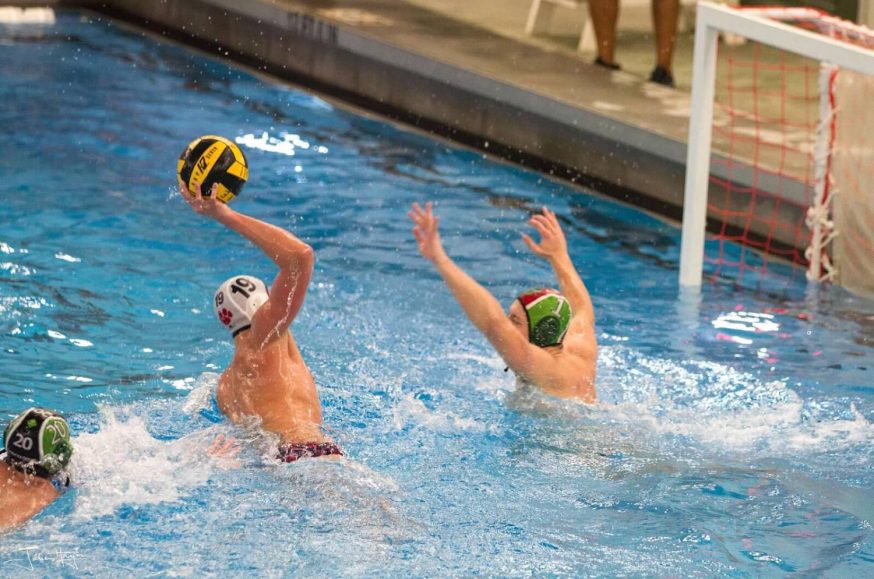 Noah Lawson (number 19) was named to the USA Water Polo Youth National B Team recently, which will compete in Hungary in August.

Center Noah Lawson, ‘21, was recently named the first player ever from Conant to make the USA Water Polo Youth National B Team, which will compete in Hungary this August.

Lawson was chosen for the team after being evaluated in California earlier this year when he was participating for the Midwest Zone team in the Youth Olympic Development Program, which happens to be coached by Conant head boys’ water polo coach Tim Daniel, who has coached Lawson since he was in fifth or sixth grade when he started playing for the Northwest Chicago Water Polo Club (NWC).

“I owe a lot of this to Coach Daniel. I feel like he’s been my guide through this all, and if he wasn’t my coach, or groomed me as his player, then I wouldn’t be as successful as I am today and probably wouldn’t be going to Hungary,” Lawson said, who started last season as a freshman on varsity.

“He has very good legs. He seems to know where the goal is at all times,” Daniel said. “He is able to deliver the ball wherever his body is in the water and deliver a shot on goal.”

Though Lawson’s skills are fundamentally sound, his teammates and coaches also enjoy him as a teammate that brings great character to the teams he’s on. “He’s able to drive and motivate a team to come together, and when he uses his ideas and speaks with his voice, he really motivates his team and gets us where he needs to go,” center defender Mikey Bland, ‘19, said.

With Lawson already being on multiple teams, he is ready to adjust to being on a new team with teammates he doesn’t know yet. “I think it’s about being able to communicate with them and starting a bond with them right away,” Lawson said. “Just so you know and can trust them in the water that they’ll do the right thing.”

The trip to Hungary should provide Lawson with valuable experience that will help not only him, but the teams he’s on as well. “Playing water polo outside of the U.S., outside of Illinois in general, is just a great experience, and to be able to go to Hungary and play with that level of players will improve my game a lot, and hopefully I will be able to take it back to people in Illinois on my Conant team and for NWC,” Lawson said.

“He’s going to meet a new perspective of the sport. A new country, new aspects, new coaches, and he’s going to learn a whole new style of play, and when he comes back he’s going to be a completely different player,” Bland said.