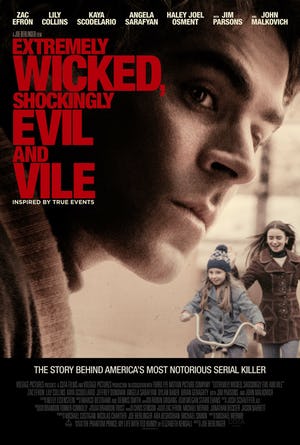 Prior to its release on May 3, “Extremely Wicked, Shockingly Evil and Vile” was criticized for romanticizing renown serial killer, rapist, kidnapper, and necrophile Ted Bundy. With Bundy being played by Zac Efron, known for his charm in the Hollywood franchise, people were concerned that the biographical thriller would portray Bundy only as an attractive young man, leaving out the grueling details of his crimes.

However, this isn’t the case for the film at all. Instead director Joe Berlinger creates a terrifying image of Bundy by making the film from his long-term girlfriend Elizabeth Kloepfer’s (Lily Collins) point of view. Although the fact that Bundy was being romanticized rather than criminalized in the trailer was a concern for some people, the film actually created a much more realistic approach than expected. The most shocking detail of Bundy’s case was how he was able to charm and manipulate, not only the women he preyed on, but everyone around him, including the judge for his trial. Through showing the up close relationship that Kloepfer has with Bundy, Berlinger creates a chilling and terrifying persona of Bundy without even showing him committing the murders in the film.

Berlinger also previously released a documentary on Netflix called “Conversations With A Killer: The Ted Bundy Tapes” which showed documented videos of Bundy and the recorded conversations that he had with media and authorities. In a documentary format, it was definitely plausible to explicitly show and talk about Bundy’s murders and paint him as a notorious serial killer; if Berlinger took the same approach in this biographical thriller, the film wouldn’t have been as excellent as it turned out to be. The documentary style would hinder Bundy’s portrayal of a serial killer by not exposing a realistic point of view that the biography succeeds at doing. By painting Bundy as a regular, attractive and charming man to the viewers, Berlinger reveals the chilling reality that a majority of serial killers are able to portray themselves as an every day friend or colleague that you might come across.

This idea was especially emphasized through Kloepfer’s point of view as Bundy managed to manipulate her and paint himself as an innocent person throughout their long term relationship. The structure of the movie as a flashback also aided in its phenomenal delivery, as the very first scene is Kloepfer visiting Bundy in prison and asking him if he remembered the first time they had met. This encounter leads into a flashback and Kloepfer’s remembrance of Bundy throughout their relationship. Through scenes that mimicked home style videos of the couple with Kloepfer’s daughter, news articles broadcasting missing girls, and a sketch of Bundy’s face, Berlinger immediately creates an eerie and uncomfortable feeling amongst the viewers. These scenes smoothly transition into one another as Bundy continues to manipulate Kloepfer while Berlinger hints at him also committing murders.

The movie would have been incomplete without Efron’s convincing and realistic portrayal of Ted Bundy. Although it seemed doubtful for him to fulfill such a dark role, he serves it justice and reveals a new side to his performing skills that he never showed in his previous movies such as “High School Musical” and “The Greatest Showman”. While Efron does play Bundy as the natural charmer he was, he also shows the subtle red flags and moments where Bundy’s charming persona would waver, such as when Bundy and Kloepfer visit a pet shelter to a adopt a dog. He looks into the dogs eyes causing it to whimper, and his facial expressions turn almost sinister for a brief second, creating a performance that leaves viewers with chills.

Along with Efron, Collins also delivers an exceptional performance as Kloepfer, showing the struggle she went through being in love with someone who turned out to be a serial killer. Her transition from the beginning of the movie is phenomenal, as you can see her going through depression and losing herself because of the psychological trauma that Bundy puts her through from his lies.

The best scene that significantly tied the film together was the very last one. The scene shows Bundy and Kloepfer back in the prison as she asks him to admit that he did commit those vile murders. Once again both Collins’ and Efron’s performances here are exemplary as he finally admits to her, while the film reels back to those moments revealing Bundy’s subtle psychotic nature throughout Collins’ times with him.

Even the film’s title is well done, as “Extremely wicked and shockingly vile” was how the judge described the killings; clips from the actual trial are shown at the end of the film. These words seem even more accurate and terrifying as the audience is put through what Kloepfer was put through in the film: attempting to find the serial killer in Ted Bundy as he did such a great job of manipulating everyone around him.