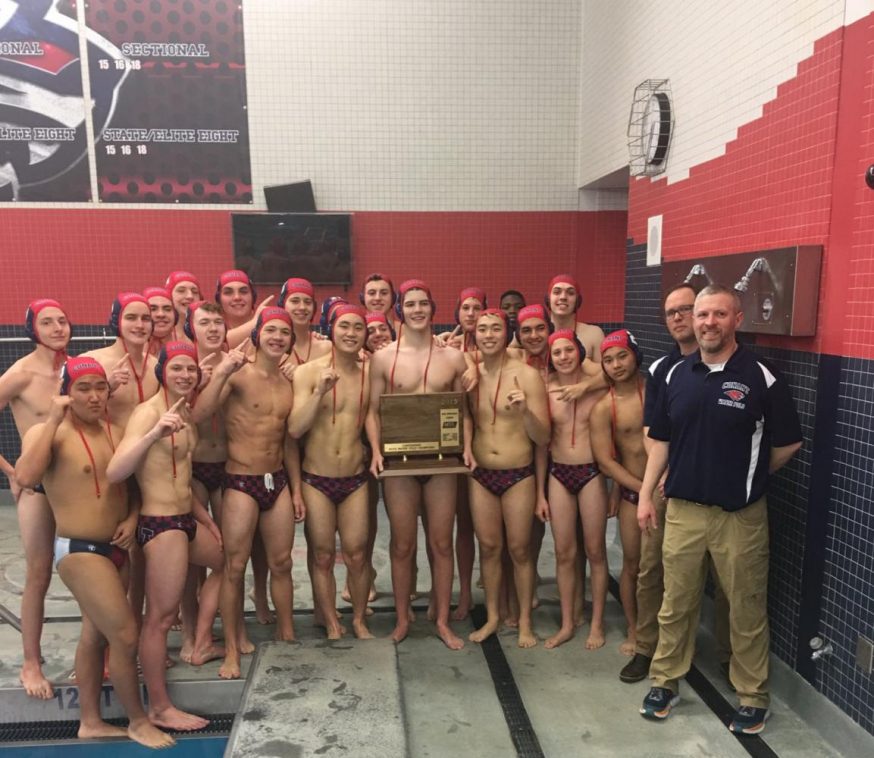 The boys’ water polo team after winning the MSL Conference Championship over Hersey on May 2.

Last season, the boys’ water polo finished fourth at State, their highest finish in program history, and their head coach, Tim Daniel, won the IHSA Boys’ Water Polo Coach of the Year Award in October. This season, the team is currently 26-4 and are MSL Conference Champions. Besides the success the team has had in terms of wins, the players and coaches have established a culture that goes beyond the sport.

“There’s a lot of great kids here,” Daniel said. “The kids are what make the program. Conant has great kids, great athletes, great parents, and a great administration that supports us, so I think we are just a part of the overall culture at Conant.”

The team has values that everyone adheres to, such as being on time, having a no hazing environment, and having the older athletes help the younger athletes. “I think those basic habits we’ve identified lead to our success,” Daniel said.

“We’re all kind of here to help each other out,” center defender Jake Lydon, ‘19, said. “Even during practice we’ll help out the JV guys. Just aquatic sports in general are a very tight knit group of people.”

Another value Daniel has taught his athletes are those of the New Zealand Men’s Rugby Team, which is new for this season. “Every week there’s a different lesson that we learn about them,” utility player Carson Jess, ‘19, said. “One of them was how champions do extra, so like 10 percent extra in everything you do. This week’s lesson was about having mental toughness in big situations and not crumbling.”

The team also learned how to correct each other. Daniel explained that now some of his players can help coach the other players. The team also has accountability groups that requires everyone to have a role.

“We try to emulate [the values] Daniel has whenever he isn’t around,” said Harris Dibek, ‘18, who was the goalie on the varsity team for three seasons. “Even if Coach goes inside and grabs like a cup of water or something and if people start slacking off, we make sure people aren’t slacking off when Coach isn’t looking.”

Besides teaching his athletes life principles, Daniel, who is a Junior Olympic Development coach, pushes his players to join Northwest Chicago Water Polo (NWC) in the offseason and to travel to California for the Junior Olympic Qualifier.

“Those trips are nice because we focus purely on development,” Daniel said. “We know we are not good enough to beat those California teams, but we are able to take those trips, as I joke, I like to tell the guys, ‘See, those kids are doing what I tell you guys to do, but do it well’. They’ve been able to see what skills look like done perfectly.” He added that this experience has made his athletes more excited about water polo, as it allowed them to see what else the sport has to offer, such as playing in college.

“Carson and I have been to California twice,” Lydon said. “This year we were in a higher kind of bracket, a higher kind of level. Not going to lie, we got beaten pretty good. But I think that’s one of the most important thing in sports really is kind of just learning how to lose. Obviously we are not going to win every single game, but learning how to lose and taking stuff from the other team, like what they do.

“[Daniel] will yell at us for doing some type of strategy or some technique, and he can yell at us all that he wants, but until we can see it happen to us, we’re not going to really learn.”

Last season, the team was one of three at the IHSA State Finals to win a sportsmanship banner. “That’s one of the things I’m most proud of because that’s something the parents earned, the athletes earned, being recognized as a program that’s not just competitive but also does it the right way. I’m pretty proud of it,” Daniel said.

“I think we won the sportsmanship award because I feel like we played with the most emotion,” Dibek said. “But we didn’t let that emotion affect how we treated our opponents because when we won our Elite Eight game against Lincoln-Way East, we went crazy, but at the same time we were able to console the people that were feeling down and understand that it sucks for them that they lost.”

The team is looking to build off their fourth place finish at State last season. “Part of our culture is just helping out the younger guys, so a lot of what we are doing in practice is showing the younger guys what it means to work hard and pay attention so that way they are set up for success in the next years when we’re not there,” Jess said.

The State Series is coming up for the team. The Sectionals will take place at Conant from May 6-11. If the team wins Sectionals, they will qualify for State, which will be on May 16-18 at Stevenson High School.