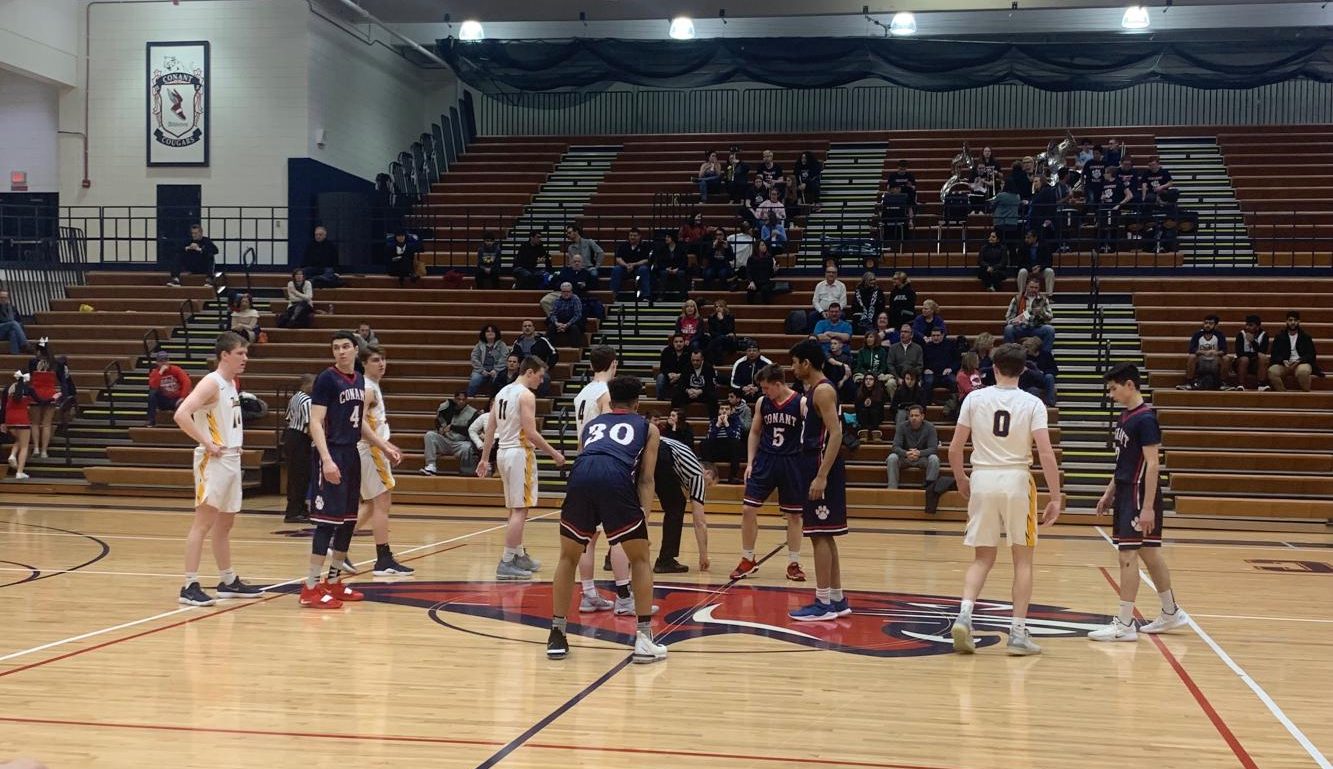 The boys’ basketball team gets ready to play Glenbrook South last Wednesday in the Class 4A IHSA Regional Semifinal round. The Cougars lost 47-33, which ended their season.

An upset seemed to be in the making when the boys’ basketball team was up 17-15 over the Glenbrook South Titans at halftime of the Class 4A IHSA Regional Semifinal game at Conant on Wednesday. An upset seemed even more possible when the Cougars were up 23-20 with under four minutes left in the third quarter.

Unfortunately for the Cougars, the Titans found their shot and never lost it. Starting late in the third quarter, the Titans went on a 27-10 run to end the game and ultimately the Cougars’ season. Conant finished the year with a 12-16 record.

Head coach Jim Maley said, “[Glenbrook South] shot really poorly in the first half. We told [our guys] they were going to make shots in the second half. We had to be able to fight through and look towards the next play. Sometimes when we give up points on the defensive end, we take that to the offensive end.”

Captain and forward Raj Mittal, ‘19, who had seven points, said, “[Glenbrook South] started to put a little bit of pressure on us, and our shots didn’t hit a couple times today. They got rebounds and pushed the ball, and we struggled into the zone.”

The Titans got most of their scoring from forward Dom Martinelli, ‘20, who scored 31 points in the game, 21 of which came in the second half.

“Their guards had great court vision and were able to find [Martinelli] whenever he slipped open,” Mittal said. He added, “The thing is, he works the zone. He’s a very smart player, high IQ, so when I’m facing the ball I don’t know where he is and so he’s navigating behind me, always looking to be open.”

Next season, the Cougars will lose four out of their five starters and 11 out of their 16 players due to graduation. The only starter they won’t be losing is forward Devon Ellis, ‘21.

“Next year, [I’m] just going to step up into filling that leadership spot that we’re losing next year and just try my hardest to work my butt off to be the leader that I can be,” Ellis said.