Coach McCormack looks back on 47 years of coaching 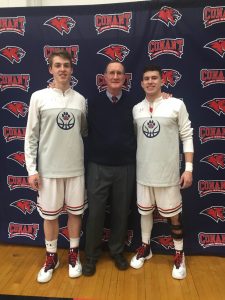 The five a.m. winds whip the players as they walk quickly towards the athletic doors. They get changed and immediately head to the main gym. When they arrive, “Coach” is already at the free throw line, still working to be the best he can.

Retiring P.E teacher Tom McCormack’s career is in its final stages. But even after 47 years coaching, McCormack said he’s treating this year the same as always.

Assistant coach Bruce Hildabrand said, “With Coach, the standards are the standards. Talent level doesn’t change expectations. He expects consistency, both on the court and in the classroom. He finds a way to get the most out of a team.”

Jimmy Sotos, ‘17, said McCormack was always looking to find the right system. “He’s always willing to try new things. He’ll move on until he finds something that works for the team,” he said.

McCormack added to the idea of working with his players. “We don’t recruit. We work with what comes through those doors. You work with your players, and find a system that works for them.”

Hildabrand brought up the 1994 super sectional game as an example of McCormack’s determination. He said, “I remember the clock stopped with 13 seconds left in the supersectional. We were up by eleven. I grabbed him by the arm and said ‘we’re going.’ He said ‘not yet.’ I said ‘Not yet? They can’t score 11 points in 13 seconds.’ Then the look on his face told me he knew we were going.”

Walsh played for McCormack as a player and now is an assistant coach alongside him. “I’ll always look up to and listen to and learn from him as much as anyone I know. He’s taught me so much, both on and off the court,” Walsh said.

Walsh described McCormack’s philosophy as being focused on the players. “With him, it’s not about wins and losses, but helping young people be the best that they can be as individuals and a team. That, in turn, equates to wins,” he said.

Danny Ranallo, ‘17, said McCormack was different than other coaches because “he truly cares about us, and how we work. He pushes us to get better every single day.”

“Basketball is part of my DNA,” McCormack said, “It’s what I do. It’s fun for me, and I love working with these kids to be the best they can be.”

McCormack also said the thing he’ll miss most is the daily practices in season. “I’ll miss the day-to-day interaction. We form a real bond out there. It’s a real brethren,” he said.