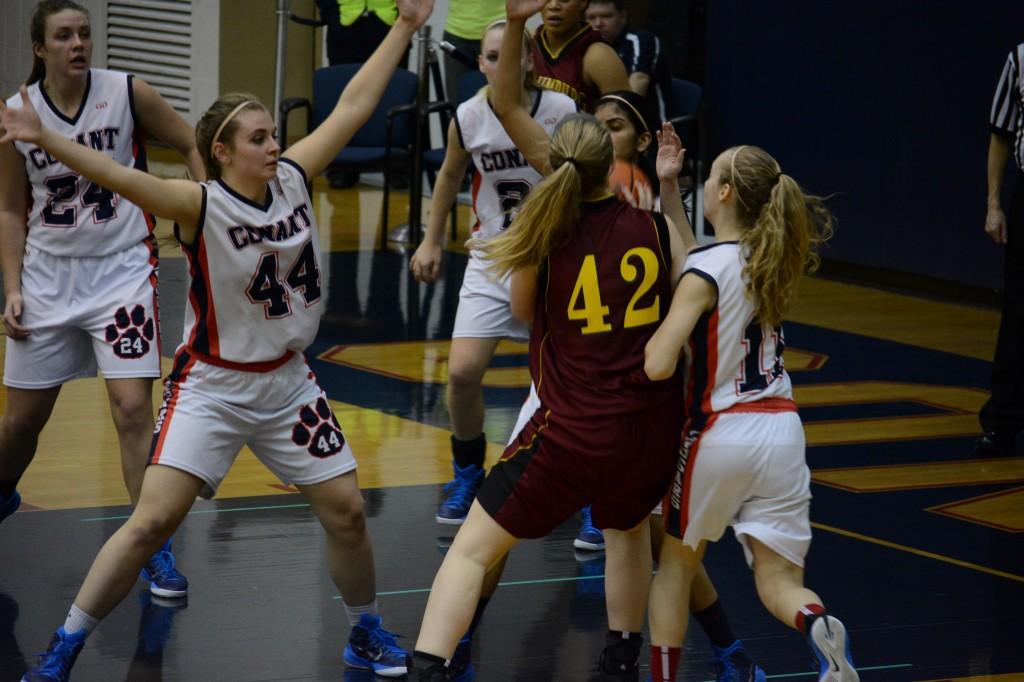 The girls defense swarms the Schaumburg player as she tries to attack the paint.

The Conant girls varsity basketball team continued their strong season with a win against St. Viator on Monday.   And, while the team lost by four points to Hersey on Tuesday, their record stands strong.  Currently second in the conference, at 21-5, and seeding first at Sectionals, they have put themselves in a strong position to make a deep postseason run.

The team attributes its success to more than just the countless hours of practice.  Many on the team have been playing basketball together for a long time. “We have a group of girls that have been playing together since kindergarten. We play very well together and the chemistry between is very strong,” said Senior Alissa Wachal, a third-year varsity player.

“Our closeness with one another and understanding of each other’s strengths and weaknesses allows us to play strategically. The team’s dedication has allowed us to perform optimally so far,” said co-captain Senior Katie Lomas.

Lomas and co-captain senior Dee Dee Durr are very proud of their team for their dedication and hard work throughout the season. Lomas said, “We really play well as a team and pass the ball well.”

The team is composed of 10 seniors, two juniors, and one sophomore–and according to their head coach, Deirdre Naughton, each player contributes in important ways.

“Our junior point guard Nireet Dhillon has been a huge spark for us this year. She is a special player for us. Our seniors Haley Anderson and Katie Lomas and sophomore Jorie Wachal have given us great minutes this season. We have a very balanced attack this year and a lot experience,” Naughton said.

Last Friday, February 6, the ladies beat the Schaumburg Saxons 52-47. The week before, Conant beat the Barrington Broncos 55-51. So, they’re not just blowing teams out; they also are able to maintain their poise and execute with the game in the balance.

“All of our losses have come against top 10 teams in the state,” said Naughton. “We came in second in our Thanksgiving Tournament and won our Mundelein Christmas Tournament for the first time. We are competing right now for a top four seed in our sectional.”

Simply said, they don’t lose to mediocre teams.  They win the games they’re supposed to, and they don’t take off-days. As a result, this has allowed them to get in position not only to make a deep postseason run, but to also open the possibility of traveling to Champaign for the opportunity to win the state title.