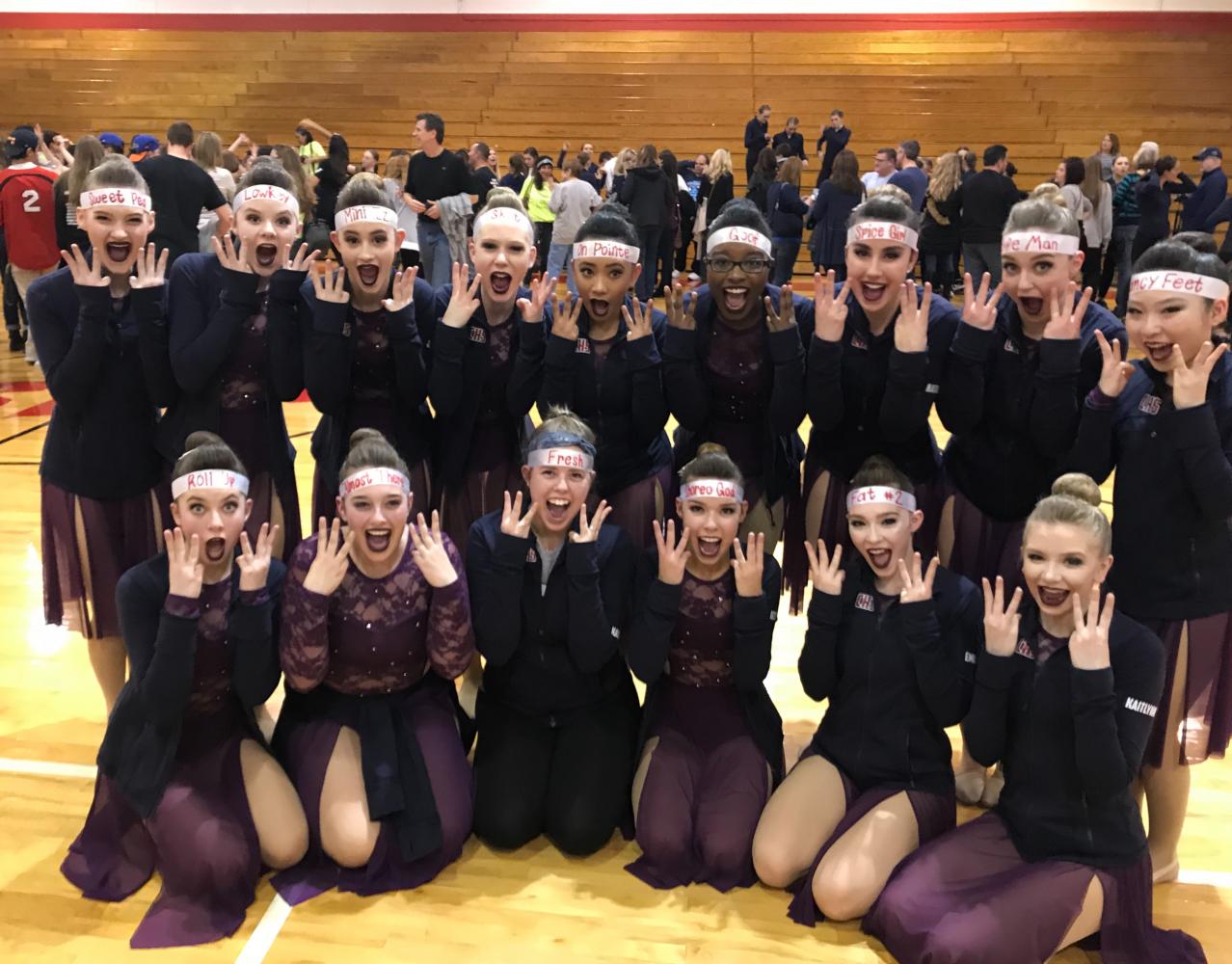 The competitive dance team, the Charrelles, celebrates after placing 3rd in the Mundelein Sectional, which qualified them for State for the second time in history.

After being less than a point away from qualifying for IHSA State last season, the dance team had one theme heading into the next season: redemption.

On Saturday, the theme changed to redeemed after Conant qualified for IHSA State for the second time in history with a 3rd place finish at the Mundelein Sectional.

“We’ve worked so hard this year with a lot of morning practices and afternoon practices and, honestly, the hard work really paid off this year, and [winning] was a great feeling,” said captain Isabelle Jahnke, ‘18.

An aspect of the hard work Jahnke referred to relates to their routine. The song the team dances to during the routine is “Helium” by Sia. According to coach Danielle Zyrkowski, the routine consists of ballet and jazz, has a nice flow to it, and is technically hard. The judges critique the routine on difficulty, technique, formations, and sportsmanship.

Zyrkowski said that this year they’ve been critiqued hard by the judges. “Every time we got feedback, it was ‘oh my gosh, the best technique I’ve seen all day, the most difficulty I’ve seen all day’—but then there was always something we needed to work on,” she said.

“Our scores were not placing where we wanted, but we’ve really brought together these two weeks and really drilled it. The girls were putting in between 12 to 15 hours a week for practice,” Zyrkowski said. She added that the hours do not include any competitions or other extracurricular activities the dancers participate in.

The team’s road ahead is straightforward. The State preliminary round is on Friday, where the team will compete against 29 other teams that qualified in their Class 3A Sectionals. The top 12 teams from Friday will advance to the final round on Saturday. The 12 teams compete again, and then the top three state finalists are awarded. The State Finals are held at the Grossinger Motors Arena in Bloomington.

Along with Jahnke, captains Claire Herrig, ‘18, and Natalie Pirovano, ‘18, are the only returning members from the 2016 State Qualifying team to be on this team. Pirovano said, “We kind of coach [the other dancers] through the schedule of what state is like, so they feel prepared and not overwhelmed, and they can just relax and enjoy themselves.”

“All season we have kind of used our experience gloating about how fun state is as motivation for the rest of the team to work hard all season, and I honestly think that helped,” Herrig said.

Zyrkowski said she believes their score right now shows they have a chance for qualifying for the final round. “The key I want them to know is that they need to go out there and perform their best performance ever. That’s why I want them to have no regrets,” she said.