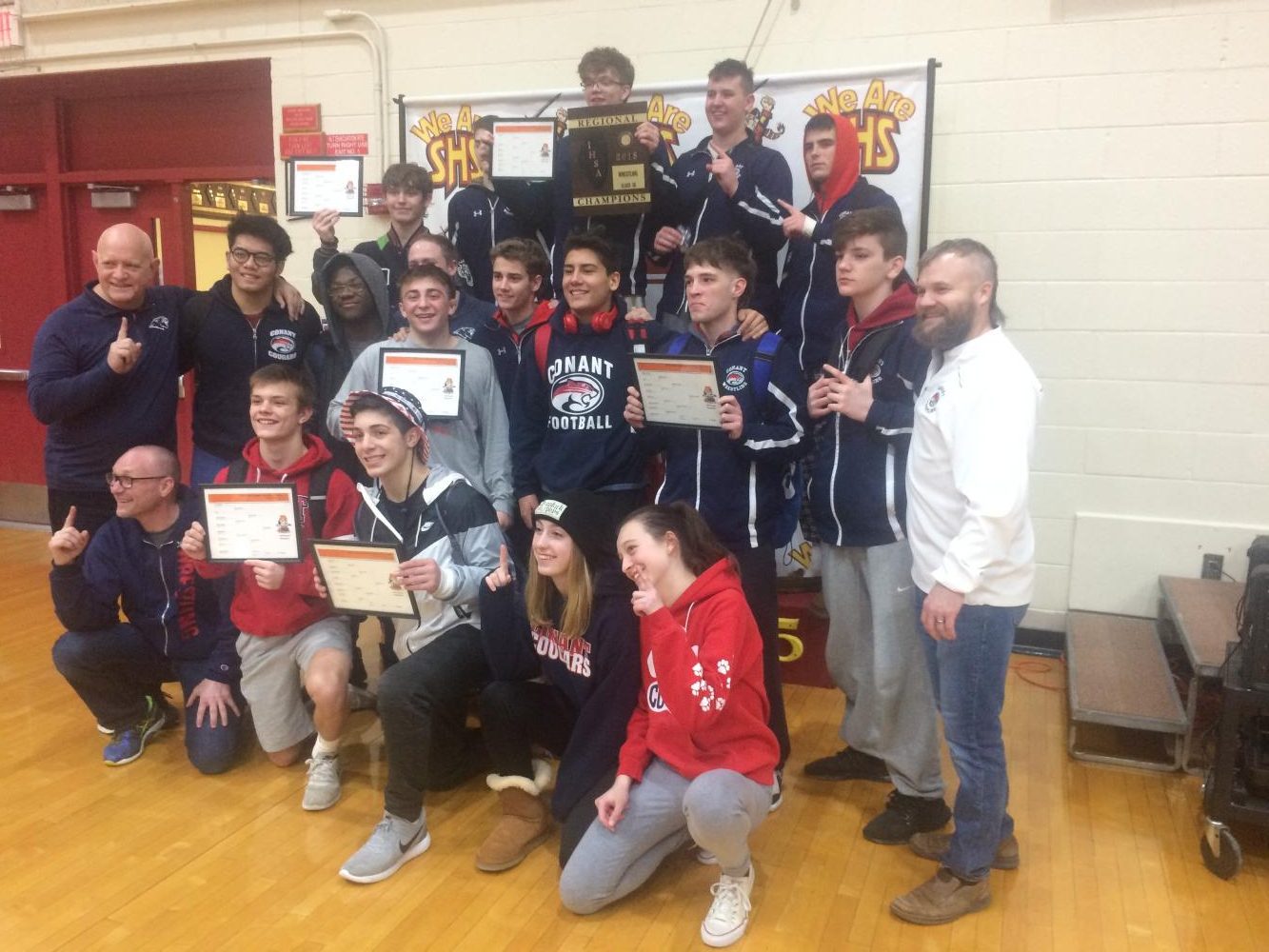 After having 10 wrestlers qualify for Individual Sectionals and winning the Schaumburg Regional, the wrestling team celebrates their impressive day.

At Schaumburg’s IHSA Regional on Saturday, 10 Conant wrestlers qualified for the IHSA Individual Sectional at Larkin next weekend, six of whom finished as Regional Champions in their respective weight class. As a team, the Cougars finished in first place, which qualified them for the IHSA Dual Team Sectional at Oak Park-River Forest.

Coach Chad Hay said that the team’s success was based on them doing all the right things in practice throughout the week and out-hustling their opponent.

Nicky Amato, ‘19, who finished as Regional Champion in the 138-pound weight class, said, “This team has come a long way. We have a lot of new kids in the lineup, and everyone is contributing very well.”

One of the new wrestlers in the lineup is Mason Sykes, ‘18. Sykes had not wrestled since he was in eighth grade, but he joined the Cougar’s team last month. When the team realized they needed a 220-pound wrestler, Sykes stepped in to fill that role.

“He brings such a great energy to the team. He has senior leadership [and] trains hard. I’m really pleased with his attitude and how he approaches wrestling,” Hay said.

“I’ve always had wrestling in me, even in the years I took off,” Sykes said. He said hard work and dedication has gotten him to this point in the season.

Another notable performance from the Cougars came from Jeremy Conroy, ‘18.

In the 126-pound first-place matchup, he faced Miguel Gomez, ‘18, of Hoffman Estates. Conroy had been defeated by Gomez twice this season but defeated him on Saturday to secure a first place finish.

Conroy said, “I had a solid game plan coming into it. I knew the Hoffman kid got gassed easy, so I just wanted to push the pace.”

In terms of how the team will finish this year, the Cougars will compete against Glenbard North in the Dual Team Sectional on Feb. 20. Hay said he believes that his team has a realistic chance of winning the dual. A win against the Panthers would put the team in the “Elite Eight” and qualify them for State.

The team is at their high point. Hay said, “These guys are in as good as shape as they’re going to be in. We’re going to fine tune some things that they need to work on that we noticed last week and this week and get ready for the Sectional.”