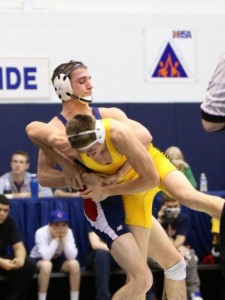 Bobby Alexander (blue) takes down yet another opponent.

“It feels absolutely amazing and surreal. There’s no other coaching staff or high school I would’ve rather wrestled for,” said Alexander.

Four time Leyden tournament champion, three time Krupke classic champion, three time IHSA state qualifier, four time MSL champion–the list goes on and on. Throughout the years, Alexander has consistently been one of the best wrestlers out there, as he would often make state for individual matches.  And he shows no sign of slowing down.

Head Coach Chad Hay said, “So far, Bobby is undefeated [36-0].  He broke the school all-time record in wins, and he is currently ranked as the number one wrestler in the state.”

Although he may not be the most vocal person out there, that doesn’t mean that the team hasn’t noticed.  If anything, it’s the opposite.  His teammates said they notice how hard he works and goes above and beyond as a teammate each day. They can rely on the fact that  he is always there for them no matter the circumstances, always willing to help others out.

“Ever since the eighth grade, I’ve looked up to Bob. He always has been the guy who doesn’t say much but is always there when you need him,” said longtime teammate Griffin Rose.

Alexander’s all-time record is currently 150-19, reflecting the work-ethic and time he has put in to get better.

“It varies depending on the upcoming competition, but mostly every workout is an intense one-and-half-hour workout that is preparing you mentally and physically for the end of the season and the state tournament,” said Alexander.

But, his biggest goal isn’t just getting the wins record.  When asked about his goals for this season, Alexander said, “I want to be a state champion this year.”

It’s that simple.  He has yet to win a state championship in his four years here, and if he does win the title, he would add to an already impressive resume.

“Bobby breaking the record shows that he is one of the best wrestlers that Conant has ever had, and the fact that he has done so excites him as well,” said Hay.

“He is ranked number one, but his ultimate goal is to make it to state and win the state title.”