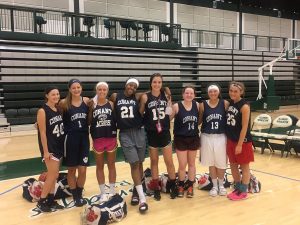 The team at a summer basketball camp.

After finishing with a 10-16 record last year, the girls’ basketball team heads into this season with higher expectations than in previous seasons. The team has great team chemistry, according to Head Coach Deirdre Naughton, who expects them to compete for a conference championship.

“We have really high expectations for this team because we have outstanding senior leadership. I really think these seniors are going to do a great job at showing our younger guys the ropes this year,” Naughton said.

Assistant Coach Todd Strauch said, “There is an enthusiasm that hasn’t been here the last couple of years.”

“We’ve been working as a team pretty well. We have good team chemistry, and there is not one great player,” Fitzgerald said.

The team’s most significant disadvantage this year will be height, according to Naughton. She expects them to struggle with this more at the beginning of the season as their tallest player, Baker, who stands at 6 feet, will be out until at least late November with a broken ankle she sustained during volleyball season.

“I will help the team in all the ways that I can,” Baker said.

“She’ll be a hole that’s hard to fill, but we’ll be okay until she gets back. We’ll hit the ground running as soon as she gets back on the floor,” Cyr said.

The season starts on Nov. 13 as the Cougars play in the York Thanksgiving Tournament. They will face off against Trinity, St. Francis, and Prospect High School during the week, in that order. On Nov. 17, they’ll play against a school, yet to be determined, that will decide their place in the tournament. Eight teams are competing in the tournament.

“I think the York Tournament will give us a really good view of where we’re at and the things we need to work on,” Naughton said. She added this tournament comes after only two weeks of practice.