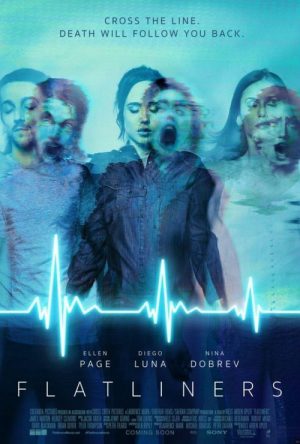 Popularity is not always the best judge of how brilliant a movie is. However, a friend and I entering an otherwise empty theater to watch a movie on its opening weekend (after heavy advertising on YouTube and Snapchat) was a good indication of how entertaining it was. As far as frightening psychological thrillers go, “Flatliners” is far below average.

The concept behind this movie is intriguing. The story centers around a group of young medical students conducting experiments concerning the afterlife. They first stop the person’s heart (hence the movie title), observe brain activity after death, then promptly resurrect the person. Each subject experiences a different vision during this brief “afterlife.” Life after death is a deep and powerful topic and has been handled beautifully in films such as “The Sixth Sense,” “Ghost,” and “Just Like Heaven.” However, “Flatliners” fails to convey the philosophical narrative a topic like this needs. Each of the test subject’s flatlining experiences are rather shallow, with each vision having a quick fix rather than needing a more complex solution.

The horror aspect of “Flatliners” also underwhelms, as it has little to offer beyond simplistic jumpscares. If you pay attention during the first half of the movie, the startling visions during the second half are fairly predictable. The movie does nothing to compare to the kind of horror films that are utterly frightening in both their concept and production, for instance, “The Shining”.

The cast fill the roles of the characters as well as they can, but there is not much substance for them to portray, even through their visions. The contents of each vision are mistakes each test subject has made, and these visions haunt the test subjects even after their flatlining incidents, until they are able to find a way to make amends to the mistakes they have made. As impressive as this sounds in theory, we do not receive deep insights into any of the characters’ minds; instead, we must settle with quick, surface-level glimpses of their pasts. There are no standout performances or stellar lines, as the lacking plot makes these things nearly impossible.

The best-executed part of the movie was the heavy tension hovering in the air during the first flatlining experiment. Whether or not we’ve formed a bond with these underdeveloped characters, the panicked atmosphere as the flatliner’s friends struggle to revive her heart proves immersive, and we are held at the edges of our seats. There is a dark undertone to the scene, hinting that it may be too late.

But even this strong point dissipates by the conclusion. The flatlining experiments that follow for the other characters carry the same feel, as though milking the only opportunity the movie has to captivate the audience.

This points towards one of the fatal flaws that makes this movie and countless other promising plots a snoozefest: there are prompt and easy resolutions to whatever conflicts are introduced. We are left with a sense of deflated tension at the end of the movie, as the characters’ problems seem exaggerated and silly when we realize not much was truly at stake.

Overall, despite an interesting premise, “Flatliners” is unfortunately thwarted by a lack of depth and a want for complex conflict.