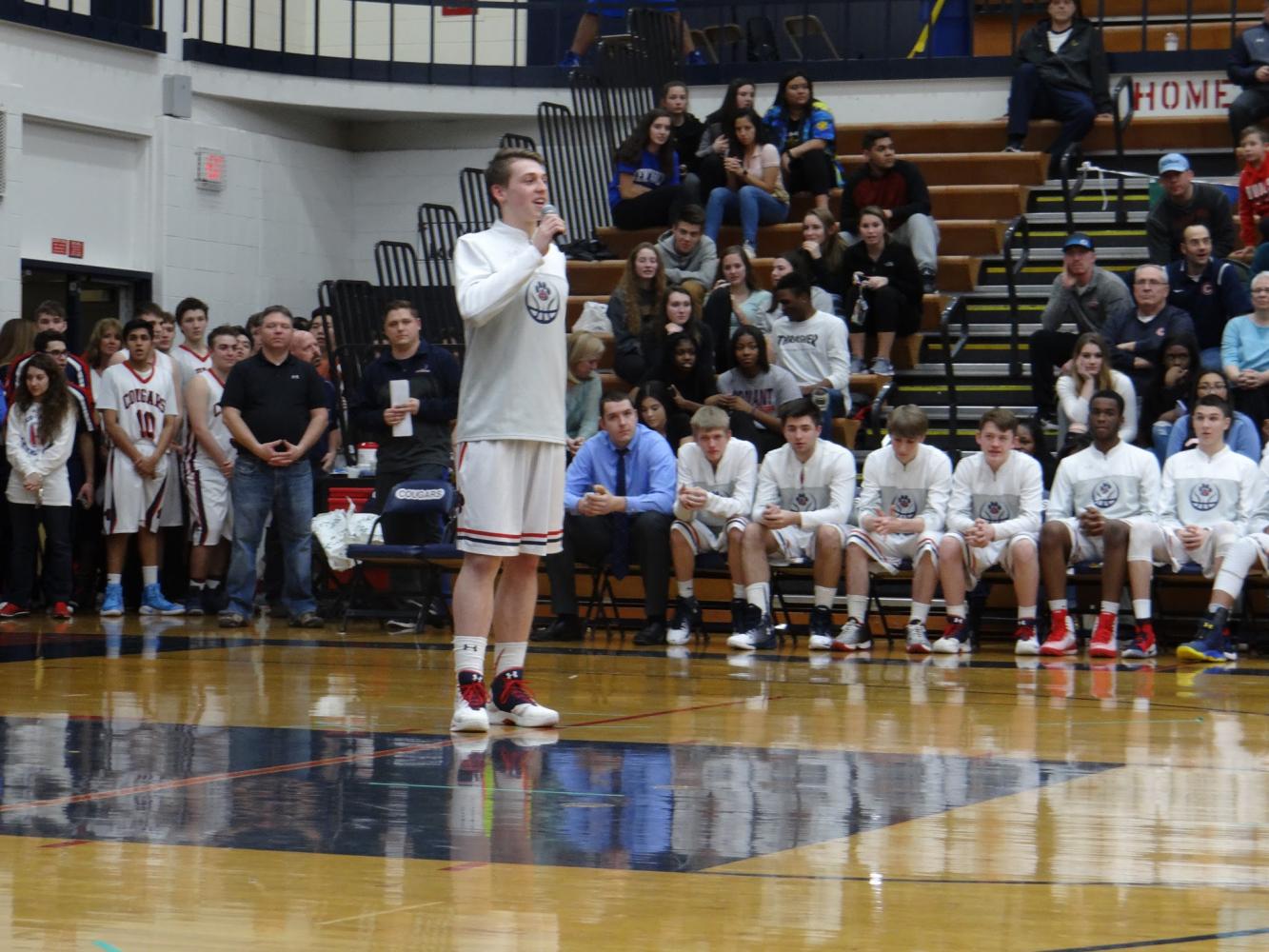 Jimmy Sotos, ’17, gives a speech before head coach Tom McCormack’s last home game at Conant. Ryan Davis, ’18, is on the bench in a blue shirt and tie. On Sunday, the two former teammates will play against each other in college.

Burlington, Vermont is an unusual place for two Conant alumni to meet up. However, on Sunday, Jimmy Sotos, ‘17, of Bucknell University, will be playing in a basketball game against Ryan Davis, ‘18, of the University of Vermont.

After finding out he would be playing Vermont during the season, Sotos said, “I talked to [Davis] about it. We texted each other. We’ve had this day circled on our calendar for a while now. We are looking forward to playing each other and having fun.”

The two were teammates for three seasons at Conant under head coach Tom McCormack. During their time as teammates, they won one conference title, three regional titles, and one sectional title. Both players said that their favorite memory playing together was winning sectionals in 2016 over Lake Zurich and advancing to super-sectionals.

During practices with each other, Sotos said, “I probably got on him more than he got on me just because that’s the player I was. I pushed my teammates. He definitely pushed me, too.” The two would get competitive with each other at open gyms, where they never played on the same team.

Davis said, “Having another person like that of that caliber on the same team in high school really just drives you to work harder every time you step on the [court] because you know there’s another player like that can knock you down a few steps every practice.”

The two players played well with each other and set an example for the team. McCormack said, “Not only were they big time players where they would make big shots and make big plays, they would do the little things like boxing out, get after loose balls, and rebound and so I think that’s one of the things that led to our [team] being so successful.

Sotos and Davis are unlikely to go man-to-man against each other on Sunday, as Sotos is a 6-foot-3 guard while Davis is a 6-foot-8 forward. However, they are likely to spend considerable minutes on the court together.

The two plan to talk after the game. Davis said, “I’m seeing how he’s doing. How things are going and how’s he liking everything and things like that. Just catching up like friends — probably not going to talk about the game too much.”

Tip-off is at 1 p.m. on Sunday. The game will be streamed on ESPN3, which requires a subscription.

For a follow-up on how this game turned out, check out this article from the Burlington Free Press.