Conant teacher runs for Vice President of the United States 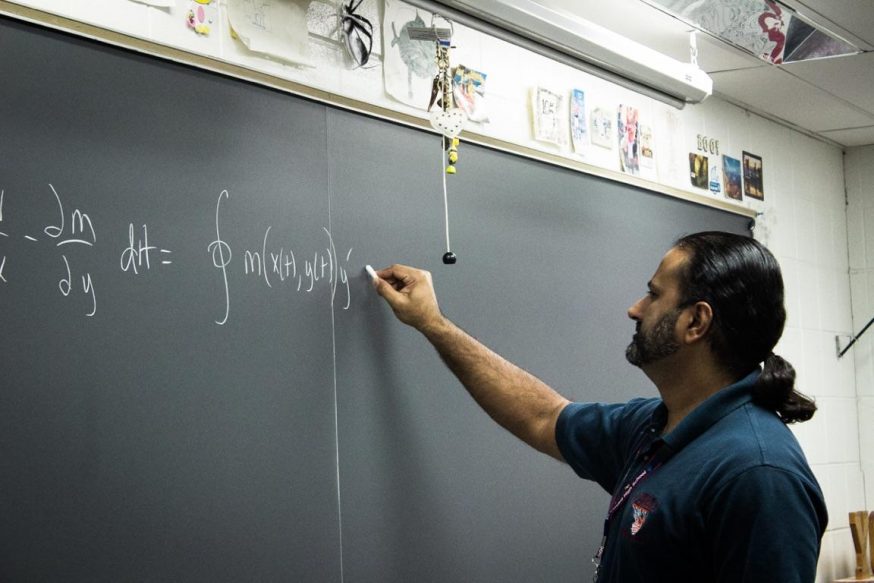 Conant math teacher Amar Patel, pictured in his classroom in 2016, is on the Illinois ballot as a vice presidential candidate for the United States.

Many students have known Amar Patel as a math and computer science teacher who has been at Conant for 23 years. However, they may not know that alongside his running mate Brian Caroll, Patel is on the 2020 Vice Presidential ballot under the American Solidarity Party.

At a young age, Patel became interested in politics through family discussions on Indian politics and democracy. Although he wasn’t familiar with the people and subjects they brought up, this was when Patel cultivated his interest in political discussion that influenced him later in life. This intrigue in politics was further intensified through his schooling.

“In high school, I had great sophomore and junior year social studies teachers that made the storytelling of political activity compelling,” Patel said.

Patel kept up with American and world politics throughout his high school and college careers, which he recently shared with The Daily Herald. However, it wasn’t until after the 2016 election that he became affiliated with his current party.

While volunteering his time at Feed My Starving Children, Patel came in contact with a group of people that represented the American Solidarity Party. After further discussion, he realized that the beliefs of the American Solidarity Party (such as environmental protection and the need for social justice) resonated with him. After becoming involved, Patel later became the Chairman of the party in 2018.

“Finding [the American Solidarity party] was dumb luck,” Patel said. “Maybe I would have found out about them further down the road, but that was cool.”

When Carroll won the American Solidarity primary, he had anticipated that one of his former opponents would be his running mate. However, those candidates, and others Carroll later asked, had previous obligations.

Unknowingly, Patel was already showing his capability as a running mate as he fulfilled his Chairman responsibilities at the time with ease. Patel, who supported Carroll in the primary, was offered to be the American Solidarity Party’s Vice Presidential nominee in mid 2019.

Patel’s experience as an educator has created a foundation for his political life. As a teacher, Patel believes that no matter a student’s background, everyone deserves to be heard and have a sense of belonging.

“From my experience, even the most quiet student likes to be acknowledged,” Patel said.

Patel said he wanted to be part of the presidential campaign to give a voice and another option to people who do not feel they are being heard.

Despite Patel’s ambitious political campaign, students likely don’t have to worry about him leaving the classroom for the White House.

“We’re not looking to make a serious run at the office,” Patel said. “[The campaign] is getting the word out to people that want a voice and aren’t represented.”

Ananya Maddulapalli is Opinions Editor and a junior at Conant. This is her third year on the Crier Staff. At Conant, Ananya is apart of the Conant Marching Band, Conant Theatre, and RISE. Outside of Conant, she enjoys playing the clarinet and tenor saxophone and being with her dog.