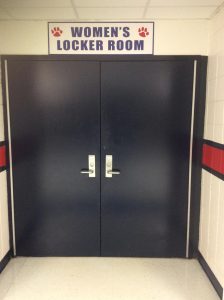 Superintendent Daniel Cates described the evaluation process for how transgender students are given locker room accommodations. He said, “The Board of Education has adopted a position in which the administration will review each case individually, and depending on the individual complexion of a given case, access to the bathroom and locker room may be granted, with one important qualifier. If a student is granted access to the locker room of the identified gender, this student is asked to make an agreement and commitment to utilize a changing area when changing clothes.”

Accordingly, D211 granted Maday locker room access with the stipulation that she was to change in a curtained area, just as Student A was offered.

However, Maday and the ACLU demanded completely unrestricted locker room access, attempting to set a court precedent for future students.

Maday said in a statement released by the ACLU, “I just want to be treated like every other girl in our school… I just want to be able to get dressed for P.E. class without having to jump through a bunch of hoops.”

Brashears said, “I feel like [limited locker room access] draws more attention to the transgender teen. This could result in possibly more harassment, which we wouldn’t want.”

Garcia said, “I think parents who are worried that this an attempt for someone to creep on their kids are not understanding of what it takes to become transgender. Once someone comes out as transgender, they typically face harsh judgment and undergo expensive and draining treatments. Transgender teenagers are committing to a permanent change and are not using it as some sort of excuse to creep on others.”

Despite Maday and the ACLU’s position, D211 asserts that their stance is most fair to all students and provides appropriate support for transgender students.

Cates said, “Each transgender student who requests access to facilities that are consistent with a student’s gender identity is considered. When this identity differs from the individual’s gender at birth, they have the support of an individual support team.” This team is comprised of school faculty such as teachers and counselors.

Parents for Privacy Spokesperson Vicki Wilson said, “Our stance is accommodate but not violate because it is extremely unreasonable to tell girls that they must feel comfortable with a biological anatomical boy walking around. A simple solution that protects and respects everyone equally is to provide an accommodation outside the designated locker room.”

Despite the rejection of the ACLU and Parents for Privacy lawsuits, both groups continue their efforts.

Wilson said, “Parents for Privacy will continue to fight for the comfort and rights of all students, but within reason. It shouldn’t be the school district’s decisions to decide when girls are exposed to the male anatomy.”

LGBTQ and HIV Project Director of the ACLU of Illinois John A. Knight said in an ACLU statement, “We are consulting with our client in order to decide how to move forward in the case in light of this decision.”

In response to the efforts, Cates said, “We will vigorously defend and protect compassionate, fair and equitable support for all students, and, at the same time, we continue to defend our supports for transgender students at the federal level.”