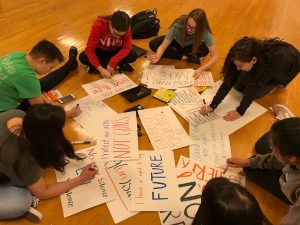 Students personalize the posters that they will carry during the walkout.

A student committee has organized a walkout scheduled for tomorrow, Mar. 14, as part of a national movement to protest the recent shooting in Parkland, Florida.

The leader of the committee, Anisha Narain, ‘18, explained, “The message of the walkout is our mission statement, which is that we aim to bring justice to victims of gun violence by striving for congressional action in response to the public health crisis. In addition, our goals center around the development of a healthy school community.”

While the walk out is a non-school-sponsored event, the student committee has been working with the administration to provide a safe and nondisruptive walkout.

Principal Julie Nowak said, “Students planning to exercise their first amendment rights are best served by informing administration in order for us to ensure student safety and to not disrupt the learning environment for all students.”

Assistant Principal Mark Langer added, “Students can be safe and non-disruptive by following the directions of staff, moving in an orderly fashion, and not making excessive noise in the hallways or coercing other students to either participate or not participate. Inappropriate, disrespectful, or disruptive behavior will be addressed.”

This walkout will be more organized than the previous one that occurred on Feb. 21.

Narain said, “During the walkout, we will have a student speaker and a tribute to the victims of the Parkland shooting. We will also have a large banner where students can sign their names or write the reasons they have for walking out.”

To prepare for the walkout, the committee has created a twitter account, fliers, and held poster-making sessions before and after school. They have also partnered with Service Club to sell t-shirts.

Narain explained, “We are selling t-shirts [for $10] as a fundraiser for the Sandy Hook Promise, a charity that aligns with our goals.”

The committee hopes for a successful and heavily attended walkout.

Committee member Natalie Urban, ‘18, said, “Because this walkout has been planned, we are hoping for a large turnout. Our goal is to present a united front of D211 and a few D214 schools to create the largest impact possible.”

Committee member Ailey Yamamoto, ‘20, added, “We’re determined to do whatever it takes to prompt government action, as well as support the students of Parkland and other victims of gun violence. Change may come in small steps, but we’re willing to take those steps in stride.”

The committee plans to continue working with the administration to organize other events like this walkout and keep the momentum going.

Urban said, “We plan on holding activities throughout the rest of the year to support the victims from Stoneman Douglas and raise awareness and support for the issue of gun violence in the United States.”