Up your game with these March Madness tips 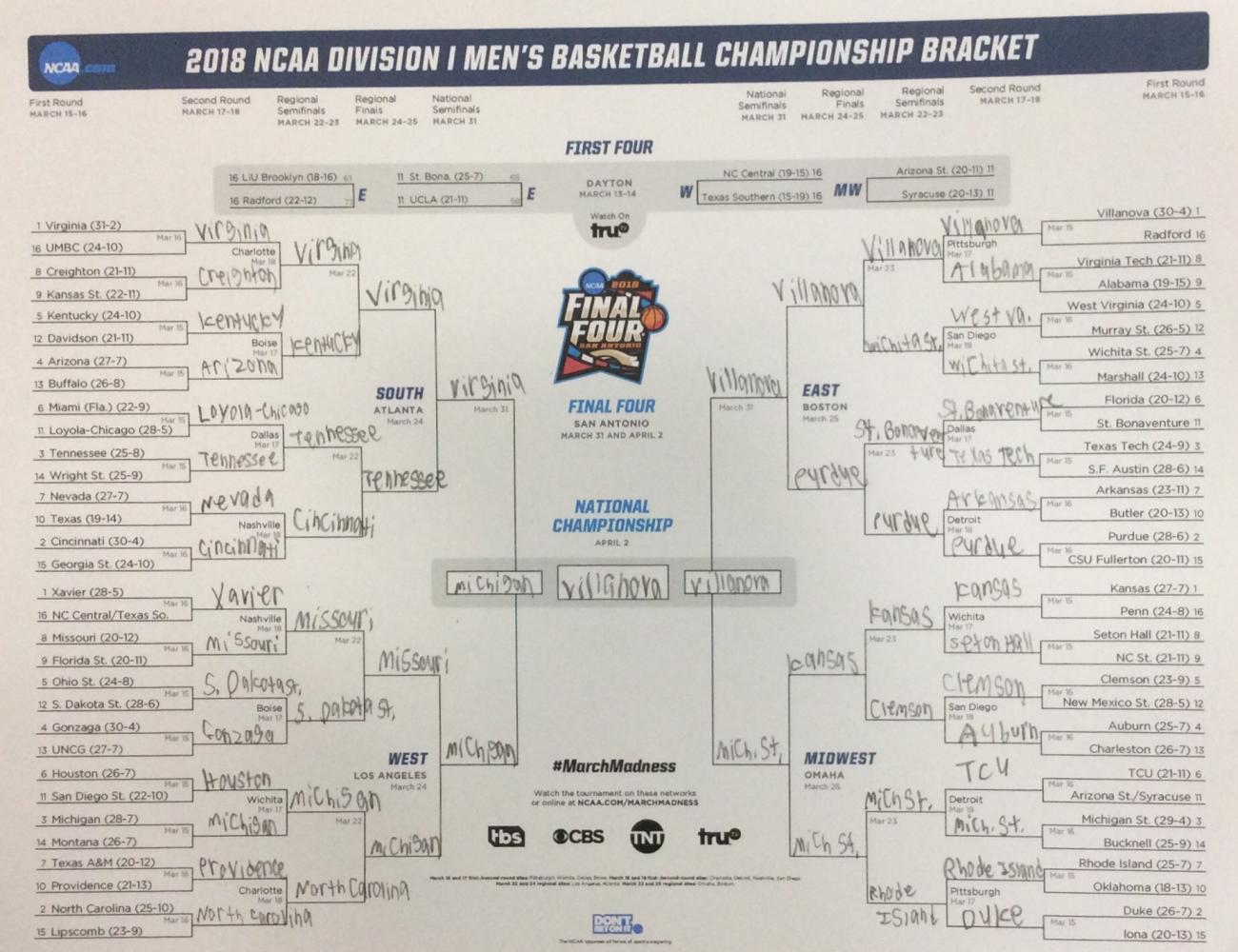 It’s that time of year again! With 68 teams making the NCAA tournament but only 64 playing in the bracket, you have a one-in-9,223,372,036,854,775,808 chance of filling out a perfect bracket, which has never been accomplished before. With that being said, you should not aim for a perfect bracket. You should have as much fun with this tournament as possible by trying to predict upsets and a cinderella team, which is a lower-seeded team that makes it deep in the tournament. Here are some tips on how to fill out the best bracket possible.

Basic facts you need to know:

The 68 teams in the tournament qualified either by winning their conference tournament or by receiving an at-large bid from the selection committee. Thirty-two teams won their conference tournament, while the other 36 teams got an at-large bid. The round of 64 starts Thursday, and the rest of the tournament’s schedule can be accessed here. The National Championship game takes place on Monday, Apr. 2 at 8:20 p.m. on TBS. The rest of the games will also be televised on TBS; as well as on CBS, TNT, and TruTv.

There are many websites that offer you the chance to fill out a March Madness bracket as a competition against millions of people. There are normally prizes you can win for having one of the best brackets in the competition, but you will have to be at least 18 to claim these prizes. But you should still compete online by making a bracket pool with your friends.

Personally, I like to compete in the ESPN Tournament Challenge. Last year, they had over 13 million brackets filled out, easily making it the biggest competition. Their point system is easy to follow, as you can gain up to 320 points each round. Also, they offer a second-chance bracket competition in the Sweet Sixteen if your bracket is busted by that point in the tournament.

Whatever website you use, please only fill out one bracket. It takes the fun out of the game if you fill out multiple brackets to give yourself a better chance to win. Also, you must have your bracket filled out by 11:15 a.m. on Thursday in order to participate.

We all know that upsets will happen during the tournament, but how can you predict which games will result in upsets? To first figure this out, I would look at a team’s Ratings Percentage Index (RPI). RPI measures a team based on their wins and losses, as well as their strength of schedule. Lower seeded teams that have high RPIs according to ESPN are Loyola-Chicago, St. Bonaventure, Davidson, and Murray State. I wouldn’t choose all these teams winning their game, but I suggest you go to the previous link to see the RPI for each team.

Another factor to look for is the record for all the teams in their previous 12 games. This gives a good indication of whether a team is hot or cold heading into the tournament. Oklahoma, a number 10 seed, is heading into this tournament very cold, as they obtained a 3-9 record over the past 12 games. Teams that are heading into the tournament on a hot streak include Michigan, Virginia, Michigan State, St. Bonaventure, and Gonzaga. Not only would I check each team’s recent records, but also their strength of schedule for those games and how well they did in their conference tournament.

Finally if you’re looking just to pick a random upset, pick Bucknell. Jimmy Sotos, ‘17, is a guard for them, and even though he isn’t normally a starter, he does play in most games for at least 15 minutes. Don’t expect Bucknell to go far even if they do upset Michigan State, but it is always fun to cheer on a fellow Cougar. Bucknell plays on Friday at 6:10 on CBS.

In the end, filling out your bracket comes down to knowing which teams are feeling good at this time of year, what lower-seeded teams have potential, and what teams have also had the best season overall. But unfortunately for basketball junkies like me, much of the tournament also comes down to luck, and those who haven’t watched one minute of college basketball can do better than me. None of my predicted national champions have made it past the round of 32 since I was in the sixth grade, so the bracket I have posted may not be the best reference for you.

For me, my national champion is Villanova. Unlike some other major programs, Villanova recruits for a team of better teammates rather than better players, and their players are not “one-and-dones.” They build their program the old-school way, unlike teams full of freshmen getting ready for the NBA Draft. Coach Jay Wright knows how to get his team ready for big games with his veteran players and can easily get his team deep in the tournament. But like I said before, my predictions are usually wrong, so I’m probably jinxing them. Good luck to all of you and may the odds be in your favor.