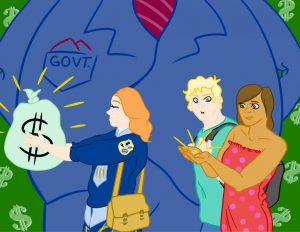 It’s no secret that the Illinois public education system lacks stability. With Teacher’s Union disputes and lack of appropriate state funding– a mere $215 million for over 300,000 students– the Chicago Public Schools system (CPS) is left without proper resources, inevitably causing the children’s futures to be suffocated by a fragmented system.

In light of the current situation, Governor Bruce Rauner signed a new law that aims to improve the quality of education for low-income students by giving them private school scholarships, which are essentially state-backed  vouchers.

Since income taxes are largely used to fund public education, the law could lead to hundreds of millions of dollars of lost public school funding.

The law also stipulates that there will be a $150 million funding increase for CPS; however, there’s a catch. The new funding will come from a 2.5 percent increase in local property taxes.

For people living in the low-income urban areas that surround CPS, it is simply financially unfeasible to uphold a tax hike when putting food on the table is already a strain.

The law is completely counterproductive in that it funnels money out of state taxes to go toward privatization of education, only to fill the gaps by financially burdening the poor.

The Crier is against the new law because it only exacerbates the current educational funding issues and increases the gap between those who can afford quality education, whether through personal or government funds, and those who can’t.

The Illinois state government should instead be allocating the state income taxes to strengthening the public education system by increasing access to technology and resources for all students. Increasing state funding to CPS would facilitate an infrastructure that would allow for all low-income students to have future opportunities, not just the ones who receive the scholarships.

Currently, most students who attend the lowest 10 percent of elementary and high schools fail to meet state reading and math standards. But, how could they meet state standards when they lack the resources to learn these essential skills?

Without access to ample reading and math materials and guidance from a teacher, it’s very hard for a child to learn, let alone meet state standards. However, these obstacles are going to remain and potentially worsen with the new education law. Because the law allocates state funds for private scholarships, there is going to be even less money available for these already struggling Chicago schools. The law will allow an estimated 6,000 to 20,000 low-income students to be taken out of CPS, but the rest– the majority– will be left in a toxic system that now relies on property taxes for additional funding.

Many urban schools don’t even have access to fast internet, updated computers, and other technologies, creating a schism between students who a part of wealthy school districts and those who aren’t.

For example, if two intellectually equal students, one attending Conant High School and one attending a poorer school, are both taking AP Computer Science, the Conant student has a systematic advantage over the student at the poorer school because of his or her access to high-speed computers, iPads, and qualified teachers. The only way to level the educational playing field is by siphoning state funding into providing needed resources. The solution is not to send the poorer student to a private school because all his/her peers still wouldn’t have access to technology.

The Crier is not in favor of the law and would much rather see new income tax dollars directly put toward improving the  infrastructure of all struggling schools to brighten the futures of Illinois’s youth.