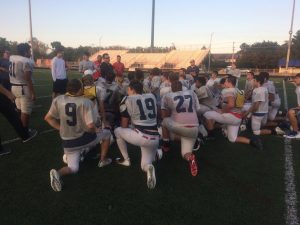 “This is a rivalry game. It becomes a pride factor. You never want to lose against friends,” said Hawks coach Tim Heyse.

Some of the skilled offensive players for the Hawks are quarterback Austin Coalson, ‘18, wide receiver Jaylen Alexander, ‘18, who is a Purdue football commit, and running back Jaylin Johnson, ‘18.

“Our secondary and linebackers need to do a nice job against their skilled guys,” said Cougars coach Bryan Stortz.

Defensive players who have been making key plays for the Cougars are linebackers Filippo DeFrenza, ‘19, Dominic Giannini, ‘18, and Jack Reiger, ‘18.

When asked about keys to the game, Stortz said, “Limit their big play, control the clock offensively, and win the turnover battle.”

The Hawks have similar keys, as well. “The keys to the game are the same keys we talk about every game. Take care of the football, control the line of scrimmage on both sides of the ball, and no penalties,” said Heyse.

This is the first MSL West conference game for both teams.