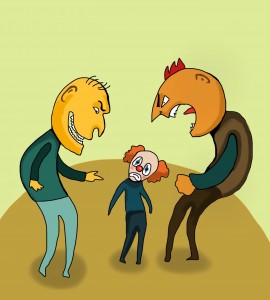 Making fun of people diagnosed with cancer is obviously wrong. That’s not an action we question. Individually we know that’s socially and morally unacceptable. More recently, making fun of even the Ebola virus has been established as unacceptable.  Just because suburban Americans haven’t personally had to deal with it, doesn’t make it okay to laugh at others across the world suffering and dying.

Making fun of mental illness is just as socially incorrect as poking fun at disease epidemics. However, that doesn’t stop a significant number of people from putting Amanda Bynes on a pedestal, pointing at her and jeering, as her mental state deteriorates.

Over the past several weeks, Amanda Bynes has publicly made accusations on social media of being physically abused by her father growing up. She also made allegations claiming that he ordered a microchip  to be implanted in her brain which tells her to say certain things and act certain ways. Her delusional state is clear as she tweets claiming she will be studying at NYU or getting married to her boyfriend and having People magazine cover it. It’s clear that Amanda Bynes is sick, and so why is she being publicly laughed at?

The answer to that lies much deeper than we think, as a society, our views on mental illness are skewed. Mental illness is not a matter discussed amongst most people, because, similar to gay rights, it’s not a topic that many people feel comfortable talking about. Considered easier to ignore than to discuss, when the issue is addressed, it is far too often misunderstood and misjudged.

Amanda Bynes is publicly battling a mental disorder that she has not been receiving proper treatment for. Instead of being helped by the public, she has been morphed into a spectacle, with people eagerly waiting to laugh at what she will do next. Just because we cannot relate to mental illness or the reasons that causes her behavior does not give us the right to make fun of her, or anyone for that matter.

This problem stems deeper than just people making fun of Amanda Bynes. It starts with people turning others’ medical conditions into a joke. Acting as if someone suffering from any illness, not just a mental one, can stop their symptoms anytime they feel like it. The cruel nature of our culture impedes the progress we could possibly make in spreading mental health awareness and potentially helping those in need of treatment, like Amanda Bynes. The stigma that comes with being diagnosed as mentally ill may keep many from receiving the treatment they really need. As a society, we shouldn’t be allowing that to happen.

Amanda Bynes is not a crazy lunatic whose actions should be ridiculed. She’s an extremely sick human being, who is in desperate need of treatment. Just like cancer, mental illness is not something that can be controlled, not something that a person battles by choice. It is unfair to treat it any differently, and even more unfair that society seems to condone this mistreatment.