We’ve all heard kids joking around about having Ebola or spreading Ebola after someone had the flu, or was home sick, or even just sneezed. But is it really right to be able to say something so harshly without giving it a second thought?

The Ebola frenzy has died down in America, but the disease is far from cured worldwide. According the the CDC, there have been 11,731 laboratory confirmed Ebola cases and 6856 total deaths as of December 13, 2014. There were four people diagnosed with Ebola in America and only one, Thomas Duncan, passed away. Unfortunately, families in Africa aren’t so lucky. Entire families have been killed, others torn apart by the tragedies.

Healthcare workers have been working valiently to prevent this epidemic from spreading any further and stopping it. In fact, recently, Time names ‘Ebloa Fighters’ as Person of the Year. 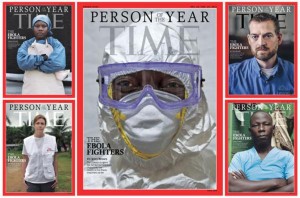 Living in America, we like to think ourselves fortunate enough to have the medical technology and resources efficient enough to the point where Ebola isn’t really a direct threat. From the average American’s every day perspective, through all the stress of a job, family, friends, and school, an epidemic in another continent is too far from our minds-and our desks-to think about.

This could be one of the reasons as to why many so easily throw around jokes about having Ebola. But taking down all the kidding and laughs from the jokes, what if it really did happen?

In an interview with the school nurse, Mrs. Dawna Smeltzer, we asked just about the same question. What would happen if a student were to come to the nurse’s office showing symptoms of Ebola? Smeltzer said, “The student would be isolated, the paramedics would be called, and the student would be taken to the hospital. Then, the district would be notified and we would have to take the proper measures that the Department of Health says to decontaminate the rooms and the building.”

All of this seems intense, yet necessary. After all, Ebola is a horrifyingly deadly epidemic–a fact that many people, seemingly far removed from the problem, often forget: 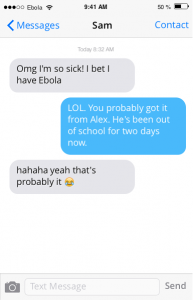 The careless jokes about Ebola may cause much “panic in the community,” Smeltzer says. “Students that don’t understand that other students are joking. [Students] go home and tell their parents, who call the district. This causes a lot of unnecessary panic, stemming from the fact that many people do not know a lot about Ebola and how it is transmitted.”

This may seem extreme to some, but when it comes to Ebola, there’s no joking around.

However, there is another side to the story: all the people taking many precautions against Ebola. Some would say that they are overreacting. Whether or not that is true, if Ebola were to spread, are they protecting themselves correctly? A local health professional expresses his concern as many, especially these last few months, come to the pharmacy to get the flu shot with the intention to protect themselves against Ebola. As absurd as it may seem, they are simply unaware of the difference between the flu and common cold versus Ebola.

It’s not just people being misinformed and not informed enough at the precautionary level; it has come to the point where this Kentucky Teacher Resigns Over Parents’ Dumb Ebola Fears. How far will this ignorance take us?

Whether you are one to take Ebola on a lighter note or on a serious note, it all comes down to one problem. Like Smeltzer said, many people are just not aware enough about the Ebola virus itself.

So how DO you know whether you have the common cold or Ebola? We thought we should set the facts straight. With the help of our local health professional, we were able to come to this very simple Venn Diagram. As a rule of thumb, he says, “When you have the flu, remember three things: fever, chills, fatigue. When it come to Ebola, one by one, your organs start collapsing and stop working. Because of this, there are many extreme symptoms and they all vary”. 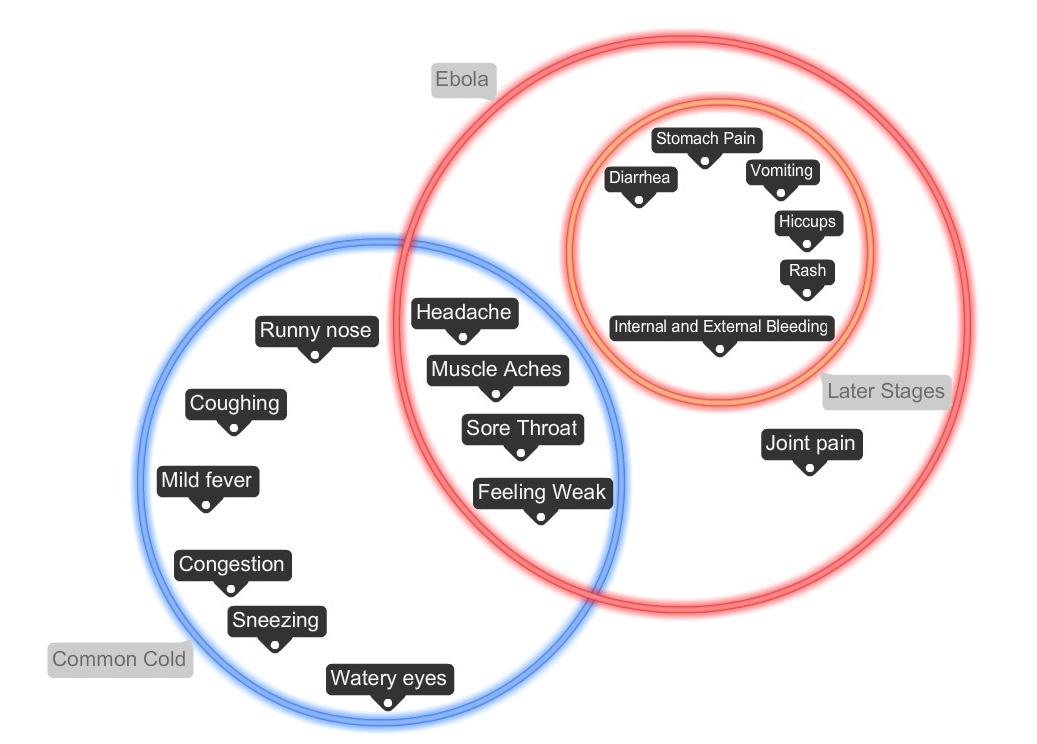 Clearly, the early symptoms of Ebola are similar to those of the common cold, but don’t panic! Ebola can only be spread through contact with bodily fluid or blood. So, if you kiss someone with Ebola, there is a possibility you could catch it. Still, if you’ve shared a smooch with someone who’s sick, you are probably not at risk. Ebola is most prominent in Africa, and there are currently no cases in the United States.

Ebola may not be a direct concern to those living in the United States, but it is important to be aware. It is especially important to those traveling outside of the country, specifically nearby or passing through Western Africa. They and their family and friends should especially know and take precautions.

In the end, it all comes down to informing ourselves and becoming more aware of the disease and what is happening in the world. Especially as teenagers in high school, many tend to dismiss important headlines for something more appealing directly to us. However, with just a little more information, we can grow more respectful of Ebola’s deadly reign and more prepared to recognize its symptoms in a true emergency situation.

Neerali is a senior and as a senior, this is her second year on the Crier. Last year she was the co-editor of the Et Cetera page. She is also involved in BPA, Speech Team, Science Olympiad, and also volunteers at a local hospital. In her spare time, she likes to bake. She believes that you can never watch Pirates of the Carribbean too many times. If she could solve one problem in the world, she would put an end to starvation.