‘Phone spa’ may be just what modern generation needs 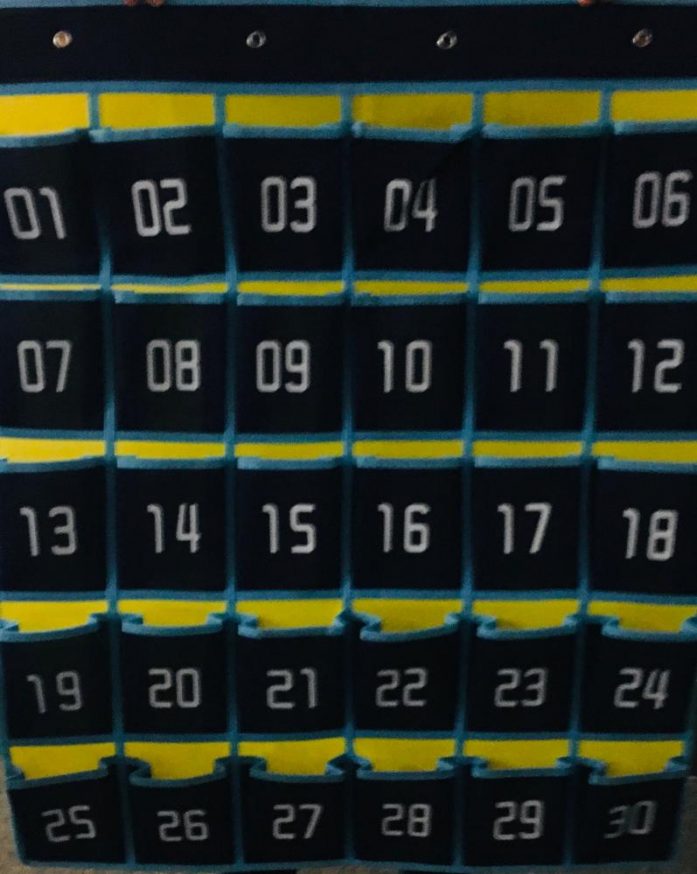 Conant’s “phone spa”: the numbered wall pocket organizer that teachers have been using to limit distraction in classrooms

In an age when people “tweet” more than they talk, it’s understandable why teachers are apprehensive about students’ use of smartphones in the classroom: smartphones, though wonderful resources outside of class, have been shown to seriously halt the learning process and reduce productivity rates within the classroom.

In fact, in one survey, 80% of students agreed that using smartphones in class decreases their ability to pay attention and to focus on what’s being taught, and in yet another survey, conducted by the University of Nebraska-Lincoln, students found themselves using smartphones and other smart devices in class for non-school-related purposes–texting, emailing, checking social media, playing video games, web-surfing–a staggering 20% of the time.

When it comes to committing lectures to memory and taking difficult exams, all this distraction takes a heavy toll: several studies, including one conducted by two professors at Rutgers University, prove that cell phone usage in classrooms for non-school-related purposes ultimately leads to lower test scores and poorer overall student performance.

In the Rutgers University study, lead researcher and psychology professor Arnold Glass, along with one of his co-workers, decided to split a group of 118 psychology students into two groups: one which would be allowed to use smartphones, MacBooks, and other smart devices in class, and one which wouldn’t. From his experiment, he found that students in the group that was allowed to use smart devices during lectures scored overwhelmingly lower on exams than students in the smart device-free environment did.

When interviewed about his study by ABC News, Glass said that what he found was applicable to middle schools, high schools, and other learning environments as well.

Still, there are many out there who would take Glass’s study with a grain of salt and argue that while phones may hinder the learning ability of a few students, the vast majority of this generation’s teens are able to multitask and concentrate on schoolwork amid distractions, and should therefore not have their cell phone privileges rescinded. Many parents, in fact, believe that though their teens may be texting and Snapchatting during their classes, their grades haven’t suffered.

While these smartphone advocates make a reasonable point, a study from The Journal of Educational Psychology confirmed that even the best of multitaskers suffer from excessive phone usage in the classroom. When analyzing samples of students in phone-free and regular classrooms, they found that although multitasking students performed adequately on day-to-day activities, scored well on comprehension tests during lectures, and completed their homework on time, they scored an average of five percent–half a letter grade–lower on cumulative exams than students who didn’t use phones and other electronics in class did.

What’s perhaps even more alarming is that the study found that the students who were not using their cellphones in class–but were in close proximity to those who were–scored an average of five points lower on exams than the students in the completely phone-free environment did.

Even in Glass’s study, students who weren’t using smart devices—but were surrounded by those who were—scored significantly lower on exams.

So what exactly can teachers and administrators do to reduce phone usage and improve learning standards in classrooms? Many would suggest that they issue a school-wide ban on cell phones. But in this day and age, that’s neither realistic nor practical; students, especially high school students, should have the freedom to access their phones during lunch, while sauntering through the hallways, and before and after school. What if there’s a family emergency? Or a student desperately needs to reach a friend? Or a student is going off-campus? There are too many risks associated with a blanket ban on cell phones.

Some teachers have, however, taken it upon themselves to issue a temporary ban on cell phones–a firm rule that students may not use their phones in class–by stowing students’ phones in what the ESL department calls the “phone spa”–a numbered wall pocket organizer that hangs on one side of the classroom–during class.

While the “phone spa” seemed unpopular when it was first introduced, it’s caught fire in recent weeks among the world language, math, and English departments. Many teachers believe it has greatly helped students prioritize learning over texting and going on social media.

The teachers’ decision is further supported by a study from the Journal of Communication Education, which found that a ban on phones in the classroom resulted in students writing down 62 percent more information in their notes and scoring a full letter grade-and-a-half higher on multiple choice tests than their peers who were actively using their phones while learning and taking notes.

Using a fixture like the phone spa in Conant classrooms not only reduces distraction but also facilitates learning and improves the quality of education as a whole.